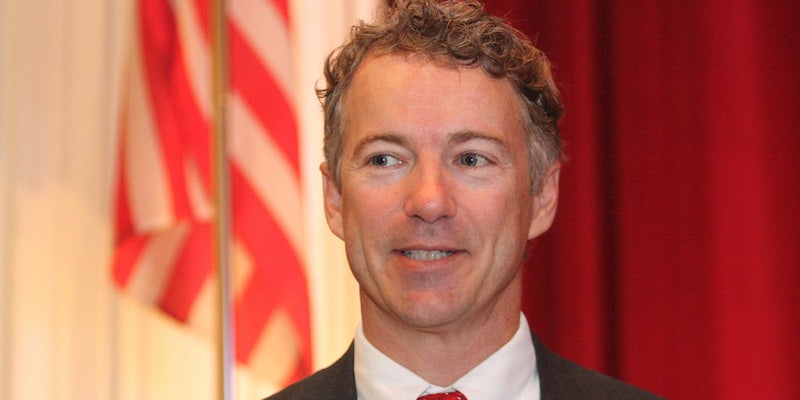 Forty two senators voted no. But two of them were more disappointing than others.

To the anguish of privacy advocates, the Senate voted to not reform the National Security Agency’s practices Tuesday evening. Two senators, Rand Paul (R-Ky.) and Bill Nelson (D-Fl.) may deserve more blame than most.

The USA Freedom Act, as the bill is called, fell two votes shy of to 60 required to pass, and in a sense, one could equally blame the bill’s loss on any of the 42 senators who voted no. But Nelson’s and Paul’s votes are particularly curious.

Widely believed to be running for President in 2016 and painted as the token libertarian candidate for the GOP, Paul has long been one of the most outspoken Republicans in the Senate about NSA surveillance. Yet he was not among the four members of his party to vote yes on USA Freedom. Why? Well, for starters, maybe because it only offered some reform, though there’s no better reform bill waiting around the bend.

To his credit, Paul had previously threatened to oppose the bill. That doesn’t make his position any less dicey; in a press release, he seemed to indicate that because the bill extends some provisions of the Patriot Act, he was proud to stand against the USA Freedom Act. That it also prevents the NSA from getting Americans’ phone records without a court order and makes it easier for tech companies to reveal when the government gives hands them secret warrants wasn’t worth it for him.

Also confusing is Sen. Nelson. According to earlier rumors, Nelson, the sole Democrat who opposed the bill, was confused by the vote, and accidentally chose “no,” though he intended to vote for reform. Turns out, that was simply not the case, according to Nelson’s office.

Nelson’s press secretary, Ryan Brown, told the Daily Dot that the senator’s “no” vote was no mistake, and that Nelson’s attitude toward the bill was closer to that of former NSA chief Michael Hayden, who believed it would somehow aid the terrorist group Islamic State.

“[Nelson] believes the bill would have undone a provision allowing for retention of certain telephone records that he feels is helpful in preventing future terrorist attacks,” Brown said.

Regardless of who is to blame, it’s safe to assume Congress won’t save Americans’ privacy any time soon. Maybe now the Supreme Court will step in.