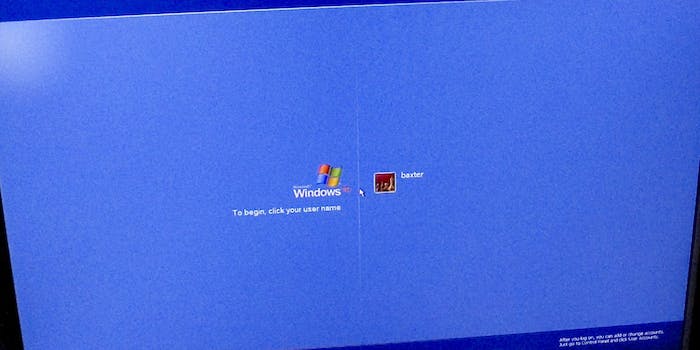 At least it's not Vista.

Are you stubbornly holding onto Windows XP despite Microsoft dropping support for the popular operating system back in April 2014? Don’t worry, you’re in good company. The United States Navy just dropped millions into Microsoft’s coffers in order to maintain support for the very outdated OS.

More specifically, the Navy’s Space and Naval Warfare Systems Command (SPAWAR) system is asking the Redmond, Wa. company to hold off on pulling the plug. SPAWAR, the department that handles communications and information networks, signed a $9.1 million contract with the computing giant to maintain security patches for Windows XP, Office 2003, Exchange 2003 and Windows Server 2003.

Windows Server 2003 is the only product of the bunch that hasn’t officially been deemed obsolete by Microsoft, though it’s set to be sent off into the sunset on July 14. This means for the general public, security patches and support for it will no longer be available. The military will be the exception thanks to the recently reached agreement, which could stretch into 2017 and cost up to $30.8 million.

The need to extend the life of the operating system is not for a lack of the Navy trying to keep up with the times. The branch began transitioning away from XP back in 2013. Despite the efforts, there are still about 100,000 workstations running the old OS and other outdated technology.

The Navy is joined by the Army, which has over 8,000 computers counting on Windows XP. The IRS also maintains Windows XP workstations, though is in the process of transitioning to Windows 7. Microsoft expects to continue supporting Windows 7 through 2020, which will probably just long enough for the organizations to fully transition and start paying contracts to extend support for that OS.

It’s not uncommon for large organizations to be slow on the uptake of new technology and software, and it doesn’t get much bigger than the U.S. military. Still, it’s better for the Navy to spend the money to maintain support than to switch abruptly and risk interruption of regular operations or continuing to operate without the assurance of security patches.

While the Navy’s use of Windows XP might cause the average person to scoff or claim the contract is a waste of taxpayer money, it’s still a considerably more up-to-date system than the one that controls the military’s nuclear missile silos. The massive stockpile of heavy weaponry built up during the Cold War still counts on technology from that era, including oversized floppy disks.