Photo via University of Pennsylvania

This doesn't quite add up.

Decorated economics professors be warned: Working on an equation during your flight can apparently be misinterpreted as suspicious behavior.

University of Pennsylvania professor Guido Menzio boarded an American Airlines flight from Philadelphia on Saturday, en route to Queens University to give a lecture. The 40-year old Italian, dressed in Diesel jeans and a red Lacoste shirt, made the mistake of sitting next to a woman who reportedly felt uncomfortable about her seatmate.

According to The Washington Post, the 30-something woman seated next to Manzio first tried to make small talk with the economics professor to no avail. Menzio seemed very consumed with his task at hand, scribbling mysterious symbols on a pad of paper. The woman immediately became suspicious of the markings and passed a note to a flight attendant. 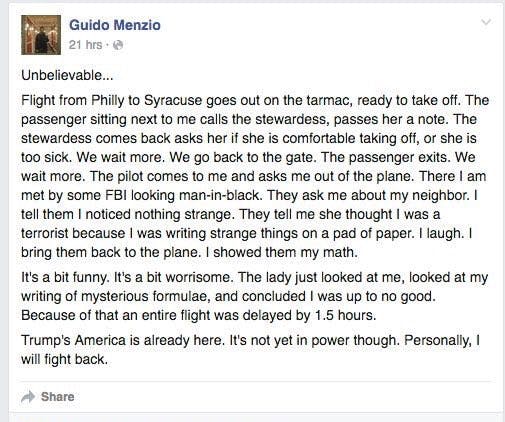 It turns out that Menzio wasn’t writing in some type of ISIS code—the Italian economist was simply hard at work on a math problem. After the woman complained, she was escorted off the plane. Soon after, Menzio was also escorted off the plane and questioned by security officials, who informed him that his seatmate suspected him of terrorism.

Menzio showed the officials his notepad, they confirmed that it was indeed just a math problem, and Menzio was subsequently allowed to return back to his seat.

As for the xenophobic passenger who probably skipped Algebra II way too many times for her own good? She never returned, which may have been for the best. Imagine trying to make conversation with Menzio after an episode like that.