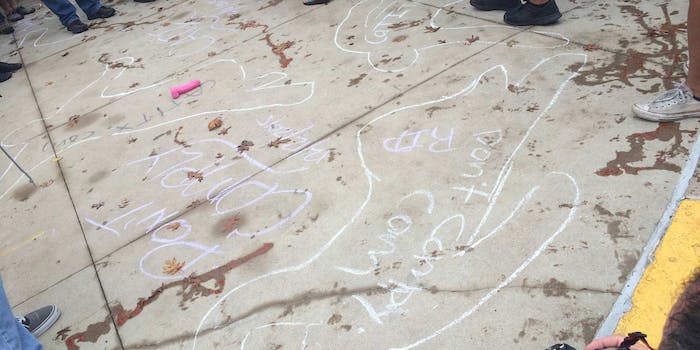 'I choose to believe that fear is not a solution to the threat of our times.'

Following a national outcry and gangs of counter-protests, there was a sidewalk lined with street art and splattered with fake blood. This was the scene just north of the University of Texas at Austin on Saturday, as protesters gathered to witness a “staged mass shooting.”

At least 17 Austin Police Department officers waited for what was billed on Facebook by Come And Take It Texas and DontComply.com as a “Life and Liberty Event To End Gun Free Zones.” But instead of community theater, a sidewalk with chalk-lined body outlines greeted arriving media across the street from UT’s Kinsolving dormitory.

“It took 10 minutes for the cops to get here, took 15 to 20 minutes for people to figure out what was going on,” event organizer and activist Murdoch Pizgatti told the Daily Dot. “The cops were set and ready for it two blocks away and it took them 10 minutes to get here. That’s showing the unpredictability of mass shootings.”

Pizgatti continued: “It also helped to serve the fact that these people were meant to come in and disrupt us and not let our message to get out. We led all of the media to them and played the higher road and allowed them all of the time and space to say everything that they had to say to the media while we came over here. And while they were talking about their emotions and how they felt about guns, a mass shooting could have been happening right here.”

The mass farting protesters, in their own words. pic.twitter.com/0Klit6eR1V

There was a march down the main drag of Guadalupe to 27th St. and Whitis Ave., where Pizgatti’s group convened with this noisy, peaceful counterpoint. Mass farting organizer Andrew Dobbs told the Daily Dot the mass farting was organized via Facebook message.

“These people are being assholes and we’re just speaking the language of assholes,” Dobbs said.

“Everybody’s here for their own reasons,” another protester, who wished to remain anonymous, said. “If anything, we think this is totally ridiculous.”

But Dobbs was more blunt about his point: “I choose to believe that fear is not a solution to the threat of our times.”

During the march, the “Texas! Fight!” school chant was remixed as “Texas! Fart!” A “We fart in your general direction” cheer carried the occasion. 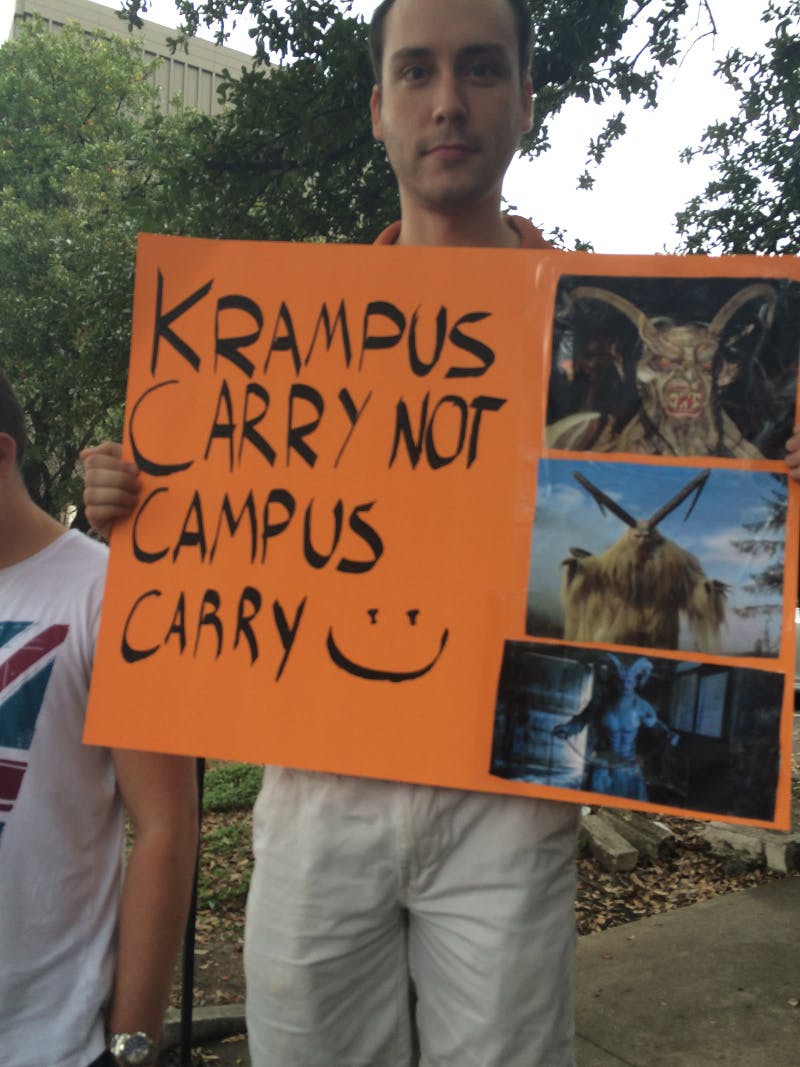 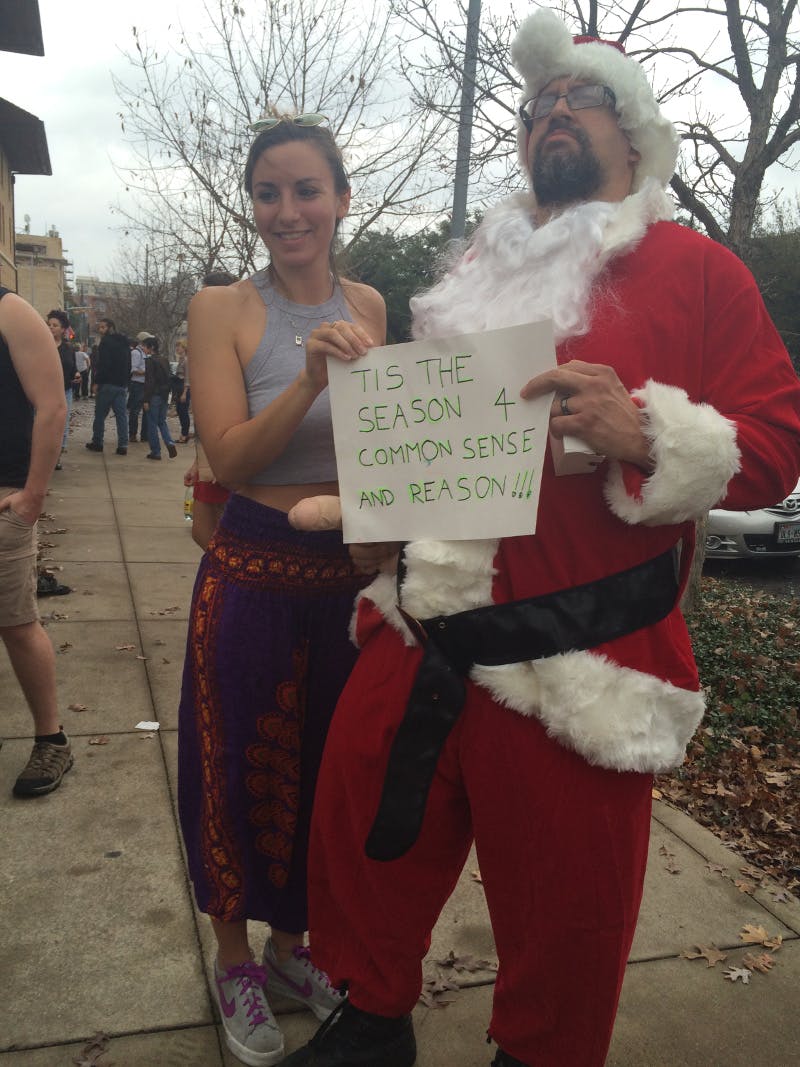 An Austin man named Juan Carlos told the Daily Dot he mostly wanted to make noise against both the protesters and the campus carry legislation.

“We’re protesting the mock mass shooting,” he said of his unrelated foursome of sign-wielding citizens. His read “no guns for whites.” “Honestly it’s just an abrasive phrase that I know would get a rise out of the [DontComply.com people].” 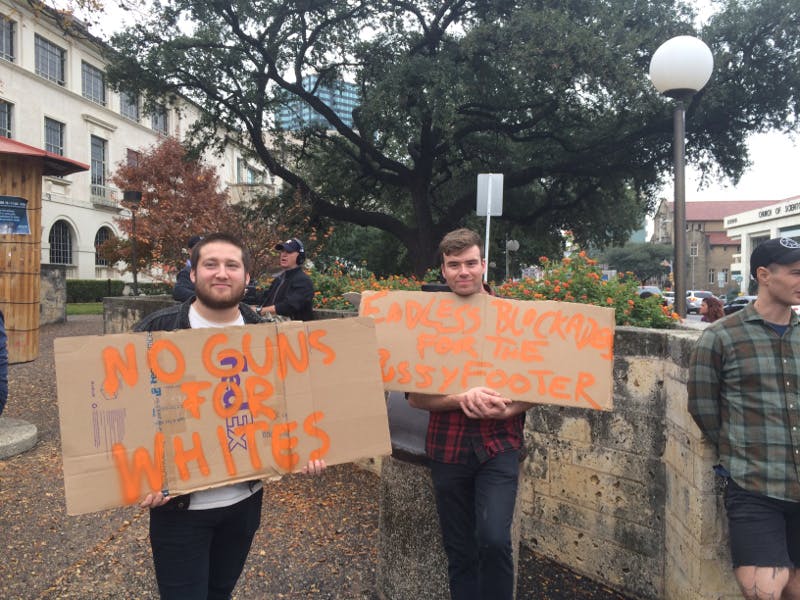 Prior to the 2:30pm CT start time, DontComply.com held a morning “open carry march” west of campus. Like the staged shooting, it existed to protest gun-free zones.

As the Daily Dot’s Dell Cameron noted on Friday:

The demonstration comes as a panel of UT students and staff members—the Campus Carry Policy Working Group—drafts recommendations on how to implement a new “campus carry” law, which will go into effect on Aug. 1, 2016—the 50-year anniversary of the UT Tower shooting.

In Texas, universities are allowed to draft campus-specific rules to create gun-free zones, but a law was passed that allows people with concealed weapons permits to carry handguns into dorms and classrooms. UT has yet to institute a gun policy of its own. 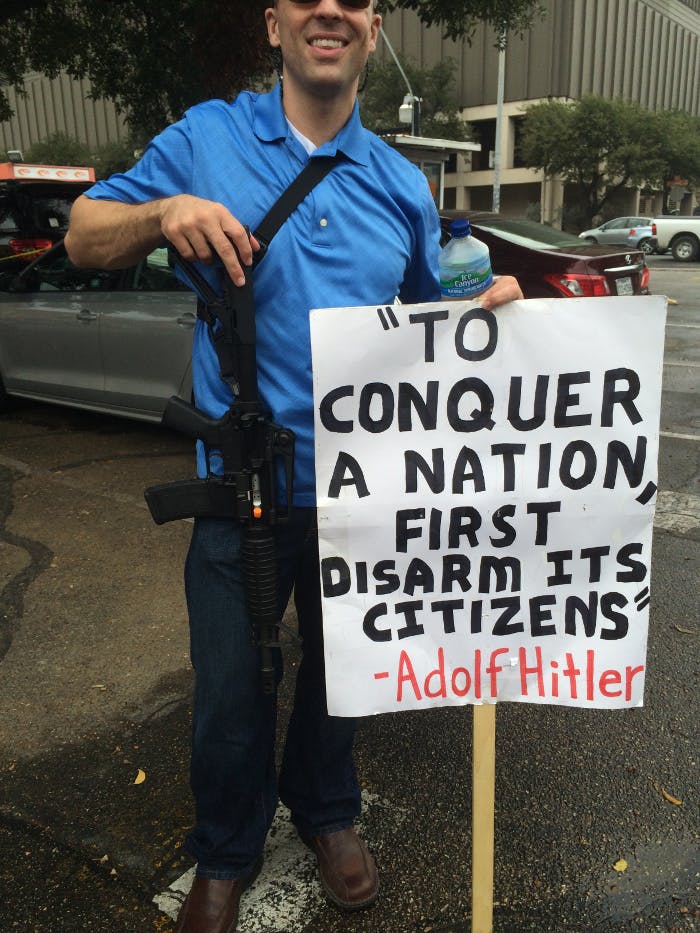