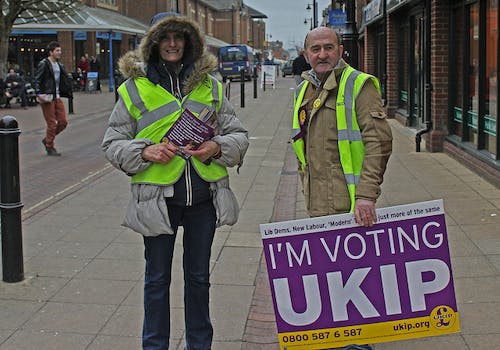 A campaigner for the U.K. Independence Party (UKIP) is being investigated after posting racist messages on Facebook, and he's not alone.

A campaigner for the U.K. Independence Party (UKIP) is being investigated after posting racist messages on Facebook.

Tony Nixon, who claims to have canvassed more than 800 homes prior to this week’s local council elections in England and Wales, allegedly made jokes about destroying mosques, setting Muslims on fire, and using a bus to run over people from Pakistan.

In one post, he wrote, “‘Instead of turning Ground Zero into a mosque why not turn some mosques into ground zero?’

His account, parts of which have been made private, also included doctored images of Michelle and Barack Obama made to look them like monkeys, according to the Mirror. (

Police are investigating his posts to determine if he has committed an offense. UKIP officials also suspended Nixon, of Great Broughton, North Yorkshire.

It’s hardly the first issue regarding UKIP members’ actions on the internet of late.

Earlier this week, a UKIP election candidate, Alex Wood was suspended over a Facebook photo that appeared to show him giving a Nazi salute. The party suspended another candidate last weekend after he liked a number of racist pages and that of far-right group the English Defence League on Facebook.

Meanwhile, another candidate boasted on Facebook about being in Thailand while a local election for which he was a candidate took place. David Watson said he could “do the job with my eyes shut” if elected and suggested he’d stay in Thailand for six months.

Despite those issues, the party has made large gains across England, taking as much as a quarter of the vote in many of the council areas in which it stood candidates. The strong result came after what some saw as a voter revolt against some of the government’s policies.