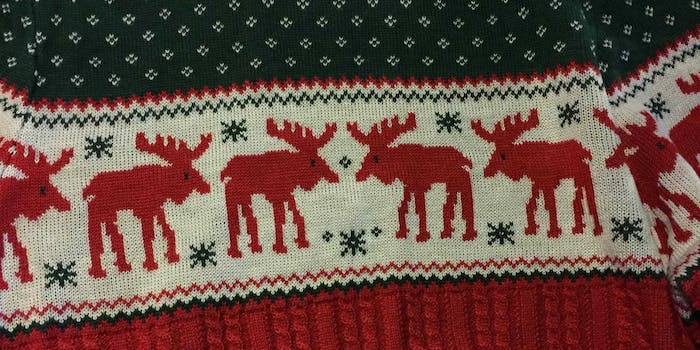 I got an ugly sweater from Uber

Delivering presents isn’t a job that is reserved just for Santa Claus. To that end Uber spent Thursday spreading holiday cheer on-demand by dropping off ugly sweaters to people like me.

The UberELVES initiative is the latest in a line of one-off promotional stunts pulled by Uber–a stunt that apparently worked, because I partook in it. Between 1pm and 5pm ET on Thursday, the company promised to send elves bearing sweaters from Tipsy Elves—with designs debuted in the film The Night Before and on the Tonight Show with Jimmy Fallon—to the metropolitan areas of Ann Arbor, Michigan; Dallas; Denver; Chicago; Madison, Wisconsin; Minneapolis; and Nashville, Tennessee. The pullovers were provided by Uber for free—save for the $10 delivery fee, which is to say not free. They were $10.

Being rooted in the 77 square miles surrounded by reality that is Madison, I set aside my general indifference directed at Uber and the holidays and did my best to get into the spirit by getting into an ugly sweater (at the direction of my editor, who made me do it).

I put in my request for an UberELVES delivery and within about 15 minutes, was able to flag down one of the workers from Uber’s workshop to bring me some tacky warmth. My elf, Samuel, arrived not in a sleigh but a Tahoe. Clad in a stocking cap, he gave me a choice of sweaters provided to Uber by Tipsy Elves. Though there were three choices available—Sasquatch, moose, or a University of Wisconsin design—Sam (we’re buds, I decided, so I can call him that) told me he only had the moose or UW options remaining.

Because you can’t just fill people’s cars with an entire store’s worth of inventory, Uber was only offering two sizes: women’s medium or men’s large. I am the size of an elf myself, so I opted to go for the women’s medium. Sam apparently disagreed with my decision—or the box was packed with the wrong sweater—because he handed me a box that ended up holding a men’s large. But, it’s the thought that counts. Even if Uber is behind the promotion and is using it primarily as a promotional tool, and even if the $10 delivery fee is decidedly not “free,” Sam and the other “elves” spent the day going out of their way to hand out ugly sweaters to strangers. That’s as warming as the sweater itself.