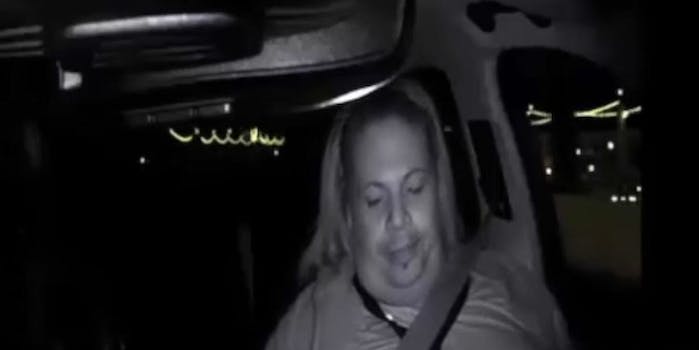 Authorities are still investigating the incident.

Video released by police in Tempe, Arizona, shows the final seconds leading up to the first known pedestrian fatality in a self-driving car crash. The brief clip includes footage of what the Uber vehicle saw on the road ahead of it, and what the driver was looking at when the accident occurred.

While it does not conclusively show who was at fault, the footage does reveal that the driver, 44-year-old Rafaela Vasquez, looked down just moments before the victim walked in front of the vehicle.

Uber suspended its self-driving car tests across the U.S. on Monday after one of its vehicles, operating in autonomous mode, crashed into 49-year-old Elaine Herzberg, who died in the hospital shortly after. Police have been investigating the incident to determine who is at fault: the victim, the driver, or Uber.

Initial reports suggested Uber would not be at fault since the accident “would have been difficult to avoid,” Tempe’s police chief Sylvia Moir told the San Francisco Chronicle on Tuesday. The police department later backtracked on those statements, clarifying, “Tempe Police Department does not determine fault in vehicular collisions.”

Vasquez said it was “like a flash” when the vehicle struck Herzberg driving 40mph. The victim was reportedly walking outside of a crosswalk at around 10pm on Sunday and only came into the vehicle’s view at the last second.

However, the recently released footage tells a different story. Herzberg is clearly seen walking alongside her bike two to three seconds before the crash. The interior footage shows the vehicle operator was looking down during that crucial window. It’s unclear whether the driver could have reacted fast enough to avoid the incident (the average driver reaction time to brake is 2.3 seconds). Regardless, the footage will raise questions about how Uber vets safety drivers for an unproven technology that has the potential to put lives at risk.

“The video is disturbing and heartbreaking to watch, and our thoughts continue to be with Elaine’s loved ones,” an Uber spokesperson said in a recent statement. “Our cars remain grounded, and we’re assisting local, state and federal authorities in any way we can.”

Tempe police along with the U.S. National Transportation Safety Board and the National Highway Traffic Safety Administration are investigating the accident. The videos, accident site, and data taken from the vehicle will be used as evidence. Uber said it was “fully cooperating” with authorities. The ride-hailing giant has yet to explain how the vehicle’s lidar and radar technology, which are designed to work both during the day and at night, failed to see the pedestrian. It’s also unclear why Vasquez was looking down.

The incident could affect the already unfavorable public perception of self-driving vehicles. A 2017 study conducted by AAA shows three-quarters of U.S. drivers are afraid to ride in a self-driving car and only 10 percent think they would make roads safer.