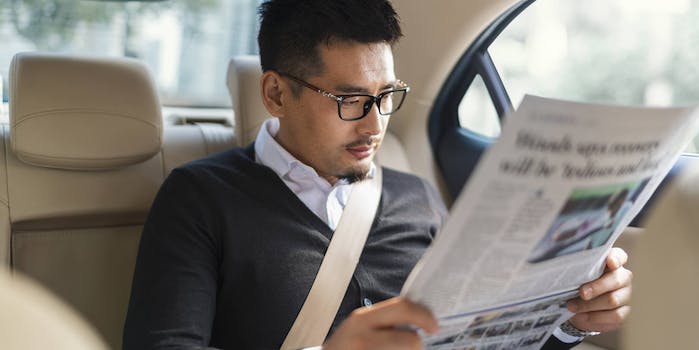 Uber wants to add some Facebook to your UberPOOL

Do you want to learn more about the person you're sharing an UberPOOL with?

When you hop in an UberPOOL, you’ve got a couple of options. One: You can sit in your seat and stare at your phone, pretending the other riders are invisible. Or, two: You can engage your ride mates in conversation, hoping for an interesting chat (or even a new friend or date).

To facilitate the latter, Uber filed a patent to integrate social media into its app so you can learn tidbits about your UberPOOL sharers before you get in the car.

After connecting your Facebook profile, the proposed app feature would show you what you and other riders have in common, such as a shared alma mater (as shown in the example below). It would also let you know if you have friends in common, if you ever worked at the same place, grew up in the same town, and/or whether you have similar hobbies. You could also potentially only request UberPOOLs where you have something in common with the other riders. The goal is to make the UberPOOL experience more friendly and less creepy, and for some, it could do just that. It could also take some of the serendipity out of taking an UberPOOL—part of what makes it attractive for me at least (other than the cheaper price) is discovering who you’re riding with and learning about them, like you would a new acquaintance at a bar. Being able to self-select shared qualities, while a potential safety feature for some, just seems bubble-inducing: If you only want to ride with fellow Stanford grads on the way to your dinner, you could be missing out on a stimulating conversation with someone whose background is completely different from your own.

As this idea is merely a patent filing, it’s unclear if Uber will eventually implement it or not, but given the detailed nature of the patent, it is clearly something Uber is heavily toying with.