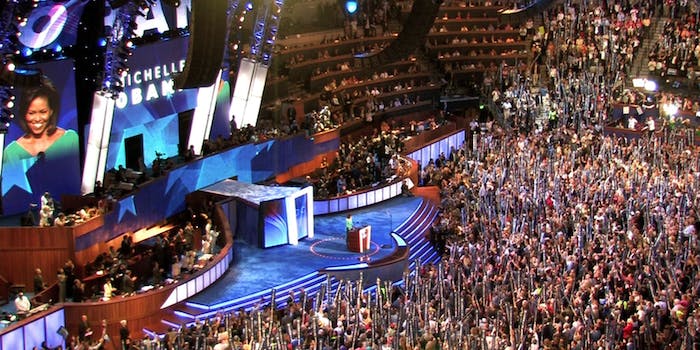 The site joins Facebook as a new social media presence and the Democratic and Republican National Conventions.

Facebook won’t be the only social media site represented at the Republican and Democratic conventions in the coming weeks. Tumblr announced this week that it would have bloggers writing about the two political events, updating readers about everything they see and hear.

“Tumblr will be on the ground with them. With 77 days to go until election day here in the US, today we’re kicking off a host of opportunities for you to follow the developments and get behind the scenes of the political process,” the site wrote on Tuesday.

During the conventions, six Tumblr bloggers will write for election.tumblr.com, conveying everything they see and hear in Tampa, Fla., and Charlotte, N.C.

Facebook announced last week it would also be attending both conventions, hosting conferences, panels, an app launch, and even parties.

Although Tumblr won’t be touting any new apps, it will be hosting parties. On Tuesday, Aug. 28, Tumblr will host an RNC Block Party in Tampa. On Wednesday, Sept. 5, it will host a DNC Watch Party.

Efforts by both Tumblr and Facebook to play a role in the major party conventions show that social media is actually becoming part of mainstream politics. One has wonder what enhanced roles these Internet properties will have developed by November, let alone 2016.