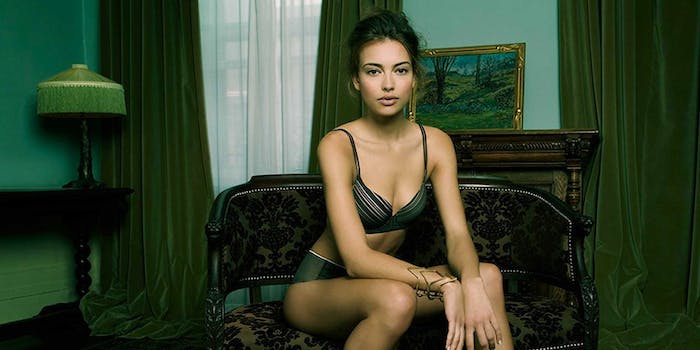 Are you a Citrine, a Mulberry, a Sapphire, or a Violet? True&Co will tell you.

For as long as I can remember having boobs, it has been impossible to buy bras for them. No matter the brand, no matter the price, no matter the cup size, they have always been either too loose or too tight. And this is all regardless of whether the smiling Victoria’s Secret saleswoman told me they were a “perfect fit.” From puberty to now, I’ve been like Goldilocks with boobs, searching in vain for a bra that’s not too big and not too small, but one that fits just right.

According to Michelle Lam, the CEO of the lingerie company True&Co, I am far from the only Boobilocks to encounter this problem. In fact, 81 percent of women, she claims, are wearing the wrong cup size. That’s because most bra manufacturers are influenced by the preconception of what an “ideal” pair of boobs looks like.

“Everyone is designing for that ‘ideal’ body type,” she told me. “What we’re saying is, ‘No. There’s an incredible diversity of body types out there, and there’s a bra for every woman to make her look gorgeous.’”

As CEO of True&Co, a lingerie company that has been referred to as “Netflix for your boobs” and uses algorithms to determine which bra is the best fit for every woman, Lam knows what she’s talking about when it comes to women’s bodies. Over the past two years, True&Co has been assembling “boob data” from more than 500,000 women, using a personalized quiz that goes beyond asking women about their cup sizes. (Are your boobs “shallow” or “deep”? Are you “well-rounded”? Which one is bigger: left or right?) 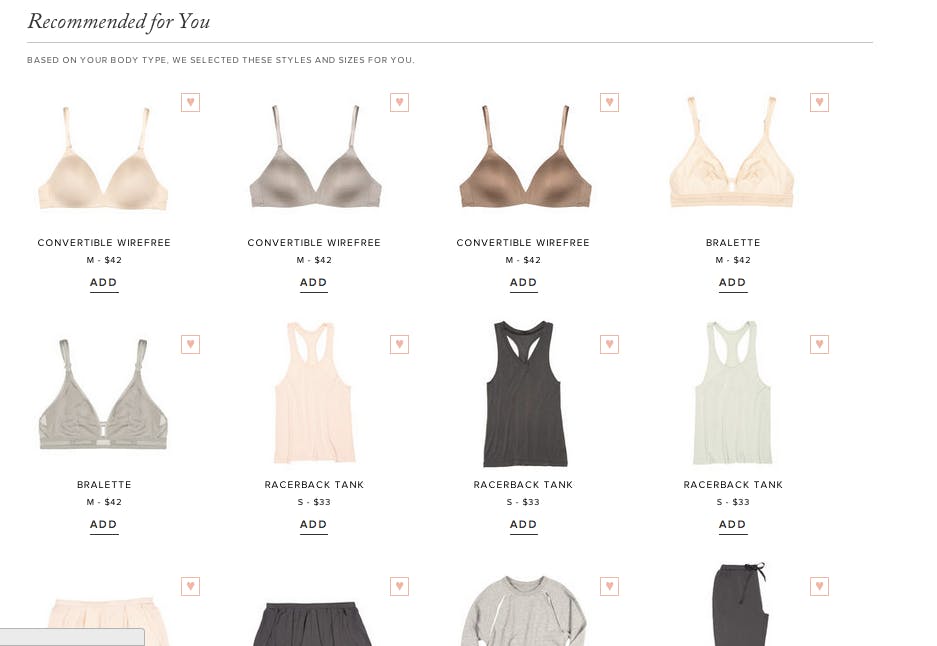 Using that data, the company has identified a whopping 6,000 different variations of breast size, which it’s used to compile a color-coded system it’s calling the “TrueSpectrum.” Instead of classifying women by cup size, women take the quiz to find out whether they’re a Sapphire (shallow, bottom) or a Citrine (full, round), among others.

Ladies, take the quiz. You will never think so much about your boobs in your life. And I’m here to tell you, you will learn something.

I am a “Violet,” or shallow and well-rounded; apparently, only 4 percent of women share this shape, which partially explains why bra shopping has always been so difficult for me. The description on True&Co’s fit quiz, however, makes me feel slightly better: “Your breasts are perfectly rounded, and are sleek and chic.” Why thank you!

True&Co has used this data to launch its “Uniform” line, which Lam refers to as “live in luxury basics for every day wear.” The line of intimates, which are mostly in the $40 to $50 range, are designed to be comfortable yet slightly provocative, which is how Lam describes True&Co’s average customer, as determined by the data. She has a name, too: Jennifer.

“Jennifer” and True&Co were born when Lam moved to San Francisco a few years ago. (Previously, she worked for Microsoft and the investment firm Bain Capital.) She realized she hadn’t bought a bra in quite some time and went to a department store to try some on.

“I was sitting in a fitting room and I didn’t think my body was abnormal in any way,” she says. “But I looked at myself in the mirror with every bra I put on, and I felt like I was the worst-looking person in the world.”

Through conversations with friends, Lam realized that there was “a huge swath of women out there who have had bad experiences in the bra marketplace,” in part to the preponderance of poorly made or ill-fitting bras. She says that in True&Co’s testing process, only one in seven bras are up to quality standards.

That’s partly because there’s a fair amount of architecture and engineering that goes into the design of the bra. Unlike other women’s ready-wear, like T-shirts or underwear, bras have to do at least three jobs at once—supporting, lifting, strapping down—while simultaneously being aesthetically appealing. Lam says this has led most women to “reduce the enjoyment of the bra to a functional product. So many women will just choose a nude bra, because they don’t want to deal with the hassle. We wanted to make one that makes their eyes light up, that makes them look and feel the most beautiful.” 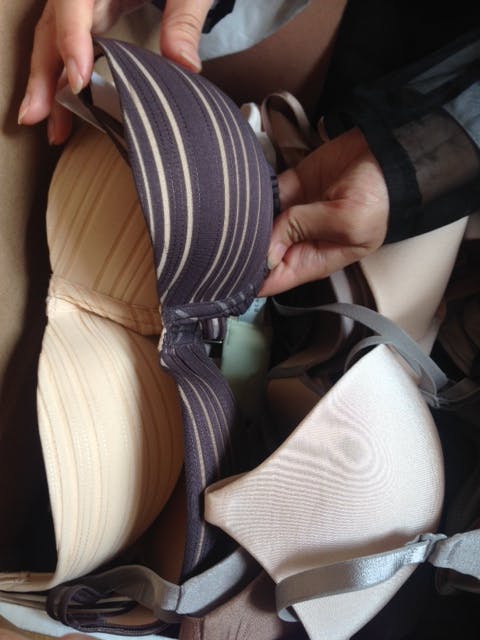 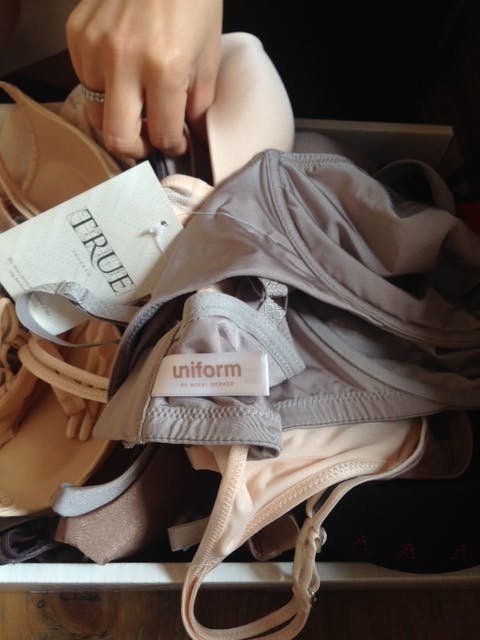 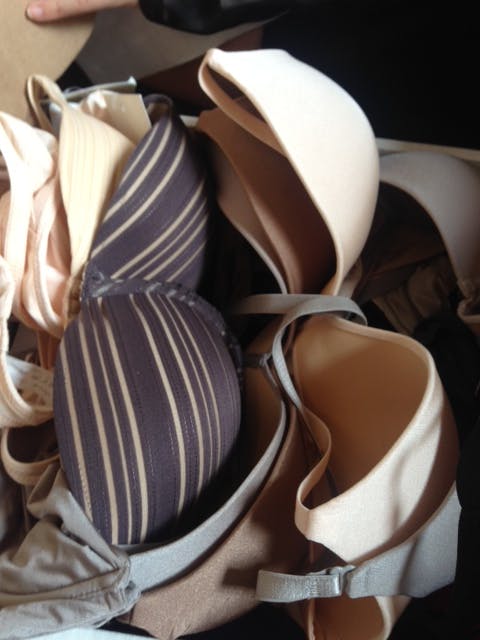 Lam launched True&Co in 2012, allowing shoppers to take the fit quiz and choose from popular brands like Calvin Klein, before the company launched its own line, She Walks In Beauty And Light, last year.  The signature bra—a dark, striped, lightly padded piece—is extremely popular and accounts for a quarter of True&Co’s revenue. When I saw it last week, it looked both comfortable and sexy, despite the somewhat silly name. But the S-word is one that Lam and True&Co try to shy away from.

“We feel like that word has been overused with this garment. Entire brands have been built on this premise, that that’s all that a bra is,” says Lam, referring to a certain Canada-based lingerie mega-corporation. “We try to talk about confidence, not sexy.”

But despite True&Co’s aversion to describing their bras as “sexy,” the term comes up multiple times in my conversation with Lam, usually with the modifier “slightly” (the company likes to describe Jennifer, its aggregate customer, as “slightly sexy.”) That’s in part because bras are intended to be worn under your clothes, giving them an added layer of sensual mystique—hey, they’re not called intimates for nothing—and because they’ve been so aggressively sexualized in our culture, mostly by men.

Unsurprisingly, Lam is frustrated by the implication that there’s something inherently sexualized about a bra. “We have half a million women all over the world who have taken the fit quiz and 7 million data points and a series of bras for women during their daily life, and then manboys leave comments on Facebook like, ‘The best bra in the world is one that’s on my floor,’” she says, rolling her eyes. “Both genders take it to totally different places.”

But with its more clinical, data-based approach to the lingerie market, True&Co is hoping that widespread perception will change. Currently, its gathering even more data from women all over the world, in the hopes of catering to boob types it hasn’t built bras for yet. (Lam says that while the fit quiz algorithm can match eight out of 10 women, there are outliers, such as the “Mulberry” shape—women with smaller curvatures and “fuller sides”—and transgender MTF customers, many of whom are smaller chested.)

With this approach, True&Co hopes it can build a bra for every one of the 16,000 body types it’s found, and maybe even blow the aforementioned Canada-based lingerie mega-corporation (which recently launched a quiz similar to True&Co’s on its site) out of the water.

“It’s validation,” Lam says. They’re recognizing this is the new way to shop for both men and women and asking what they want, but they can’t do what we do… they know how many blue bras they’ve sold, so they can say, ‘Oh, next season we can buy a bunch of new bras.’ But we know who bought the blue bras and why. It may not have been the fact that it was blue. [With our data], we get a picture of what women want before it exists.”

Correction: An earlier version of this post said True&Co has identified 16,000 breast shapes using their data. It is actually 6,000.