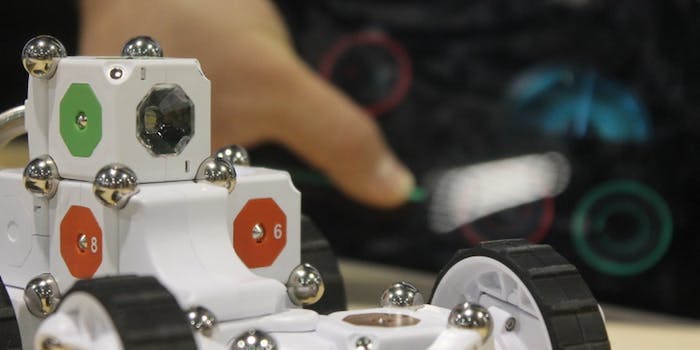 The toy blocks that will make your kids robotics geniuses

These are the Lego of the future.

Of all the cool technology coming out of the Consumer Electronics Show in Las Vegas this week, one group of tech really excites me—robots that teach kids about programming in a fun, creative way.

There’s a push to get students interested in programming and computer science. Organizations like Code.org and Girls Who Code work with students and schools to teach computer science and mold the minds of future engineers, and even President Obama is pushing for kids to understand concepts of engineering by learning to write code himself.

Creative lectures can be fun, sure, but toys shown off at CES this week are turning the playroom into the classroom—and playtime into robotics lessons for kids (and this reporter).

Modular Robotics, a Boulder, Colo., startup, creates colored, square plastic robot parts containing sensors and bluetooth technology that let kids build MOSS robots simply by snapping them together, connected by tiny magnets on the corners of the blocks. The team likes to call them the Lego of the future, and the plastic the cubes are made out of is the same as the bricks we grew up playing with.

The similarities stop there. Each cube is color-coded for a specific purpose: Green is the power cube that houses the battery and transfers powers through the blocks; red is a sensor block that reacts to light, sounds, and objects in its way; browns are the action blocks for pieces like wheels and flashlights; and blue-faced cubes link blocks together to distribute power and data.

MOSS blocks require no programming, and kids can create objects that roll around automatically. A robot with a red block positioned at the front speeds up or slows down depending on whether or not a light is shining on it.

Curious students can control the blocks with a smartphone application that connects to the creations over bluetooth, and can reprogram the green blocks using programming languages Scratch or C, which is perfect for teaching kids to code.

“It’s a great educational toy designed for tinkering with purpose,” Stu Barwick of Modular Robotics told the Daily Dot. “With technology and construction put together, you can layer on the software integration where you can learn to control the remote controlled vehicles.”

The kits are designed for ages eight and up and come in two different sizes—the MOSS Zombonitron1600 retails at $199 for 16 pieces and can create a few hundred different robots. The Exofabulatronixx 5200 has 52 pieces for $599 and can produce a few thousand robots. Modular Robotics is planning on creating more budget-friendly kits later in the year.

Each kit comes with an instruction manual for getting the robots up and running.

As this type of technology becomes more accessible and affordable, students will be able to learn programming concepts from the comfort of the carpet on the living room floor. And turn those old Legos into a city in which a robot giant rumbles through.