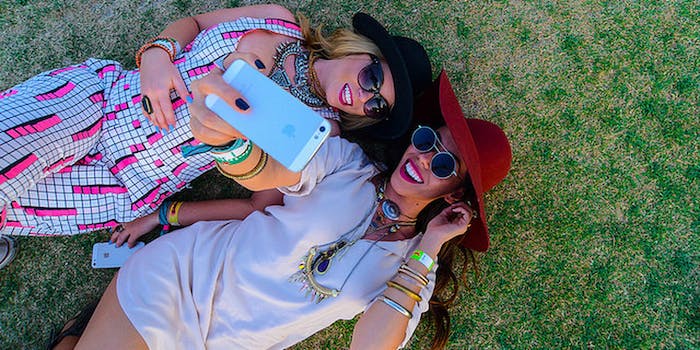 GoCam app lets you take a selfie without touching the screen

Imagine if every self-shot you snap didn’t contain your whole arm, too.

Imagine if Ellen DeGeneres’s famous Oscar selfie could have included the entire audience. Imagine if every self-shot you snap didn’t contain your whole arm, too. Selfies are always limited by how hard it is to maneuver into the right position—and this startup wants to solve all that.

Swedish-based startup company Crunchfish released an app called GoCam on June 28. It allows users to take “touchless” selfies—that is, without ever having to tap a screen. Whew!

The app uses utilizes software that detects when you’re ready to take a selfie. According to the app’s demonstration video, when you make your entire hand visible on the screen, an icon will turn green. You then close your palm and open it again to set the timer. The amount of time your palm is closed is the amount of seconds that will pass until the timer goes off. Then the camera snaps a picture, and your hand is nowhere near the phone.

Unless you have somewhere to set it down, you’ll still have to hold your phone at arm’s distance to take a selfie. But the possibility of selfies—or “usies,” as they’re called—from afar is one that hasn’t hit the market until now.

The app also takes videos and can detect motion from up to three meters away.

In addition, GoCam is programmed to recognize different hand motions that allow you to review your photos before being given the option to export them to other apps on your phone. Numerous filters also allow for some rudimentary modifications before showing off your selfies to the world.

Crunchfish specializes in developing software called Touchless A3D, which allows people to control their mobile devices by using gestures. They’ve already created touchless software for copying and pasting items and controlling settings such as playback and volume while watching a video on mobile devices. Because the company utilizes the camera built into your device to detect movements, this unfortunately means that GoCam will probably drain your battery faster.

The company announced that the app is currently available for free in Sweden and Australia with no word yet on whether they’ll make the product available worldwide. Until we find out, the rest of us will have to stick to the antiquated two-hand selfie-taking method.