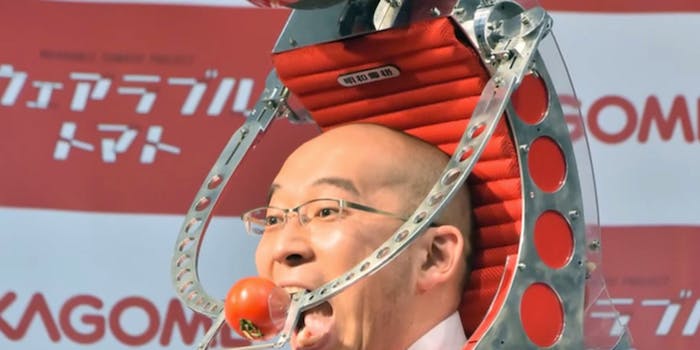 I try to shy away from opening an article with anything along the lines of “What the actual fuck, Japan,” but on this occasion I’m left with little choice: Japanese juice maker Kagome has, for some reason, engineered and debuted the “Tomatan,” a hands-free robot backpack that allows the user to eat tomatoes on the go.

The baffling technology underwent a field test ahead of the 2015 Tokyo Marathon, with one of the designers, Shigenori Suzuki, wearing it during Saturday’s three-mile fun run. We don’t have footage of that, so we can’t surmise how much of the device’s six-tomato load he consumed or how messy said feast may have been. But there’s no doubt he looked damn cool the whole time.

Fine, but what I really need is a robot that runs marathons with me on its back.