What’s going on with Ello?

The Internet's favorite Facebook alternative has been rather quiet—but it's prepping for what's next.

Yesterday I saw the three founders of Ello speak here in Boulder at the ATLAS Institute on the CU Campus: Paul Budnitz (CEO), Todd Berger and Lucian Föhr (Designers). They spent about an hour going over the history of Ello and explained where they are today.

They revealed many key points about their thinking which I had been wondering about. I’ll touch on the points that really stuck out. 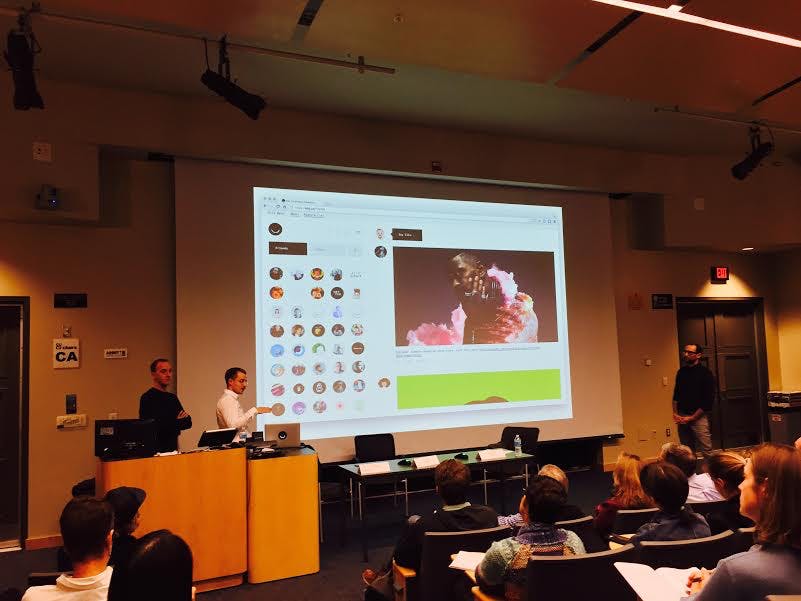 Most striking, the company said they are applying for patents to protect what they believe are innovative ideas for providing social network services. It took awhile for the audience to pry this out. This was behind the key aspect of their business model beyond selling T-shirts and features, which they were otherwise hanging their hat on as substantial enough to sustain. I understand that this is legal and normal practice, but I was personally disappointed to hear about the patent applications and wonder how this fits in with their brand manifesto and the greater good of society.

The audience also asked several big data questions. The company said that they will not sell your data, but they did say they look at it themselves, “to see what you are doing.” They had opened up the lecture with slides to paint a picture of what other companies do with your data in defining you, and emphasized that by not selling your data, Ello was different. But its not clear what they are going to do with it themselves. When one audience member asked about an API for intended third party development, they said they are still mulling the idea but it’s not an important topic to their mission as it’s not part of the various future releases already in the pipeline. What’s interesting to me of course is that even though they don’t have a convenient API for all of the data, all of the data (except passwords they said) is public. So if you and I can see it, Facebook, e.g. could easily see it too, and tell what everyone is doing just the same.

On numbers, they said they are not going to play the numbers game anymore (i.e. will not tell us) but used “millions” of users to define the number of actives, as well as accounts (i.e. you can infer under 10 million accounts and more than 1 million actives).

When asked about algorithmic feed manipulation by another audience member, they said that the information is unfiltered, however they did note that they actively promote users in many places, and “curate” specific content creators. They also showed off several famous designers who use Ello.

When one audience member asked about regulations with other countries, they said they had not crossed that bridge yet but said they were prepared to comply (i.e. censor) to serve each country differently. This was also concerning.

Budnitz took an aside to address what I was already thinking: that this familiar story usually ends terribly for the artists.

When asked how they distinguish themselves from other networks, like Facebook, e.g., the answer they gave was Ello’s goal: to surface the best content. They want to get rid of all of the features and clutter that they can and break it down to just great content, they said. While this is where the company got its start, it’s clear from their feature list and the slew of features that they have on the horizon, it’s going to keep getting more complex, including tags, and filters for advertising, because others are monetizing on Ello via YouTube videos, or inserting ads directly into the stream, e.g.

One major concept that is worth contemplating is the inspiration for the birth of Ello. They said that their philosophy for Ello is based on Budnitz’s experience living in DUMBO (Down Under the Manhattan Bridge Overpass) during a period when the area went through the kind of transformation that so many American cities do: In the early stages of new growth, artists come in to rundown industrial districts and live cheaply in large loft/studio spaces, fix the areas up with coffee shops and businesses, and generally create the tipping point for a neighborhood’s revival.

Ello, they said, was founded on this very specific method: Start a social network that begins with artists, invite all the artists to build up the best content, just as the developers of DUMBO invited artists to live in and build it up Budnitz explained, focus on the people (provide cheap rent and freedom to build), and then once built, take the focus off of the people, and move it to the content itself. They showed a picture of DUMBO’s new glass pavilioned merry-go-round citing the successful gentrified version of today’s BK neighborhood, one of the most expensive in all of NYC.

Budnitz took an aside to address what I was already thinking: that this familiar story usually ends terribly for the artists for getting kicked out of the neighborhood, no longer able to afford what they created, and that he hopes to not have that effect with Ello, but did not elaborate on how.

Yet, this shift from the people to content is in fact the idea, they said, behind their latest design efforts for the upcoming, revamped design release. They went on to demonstrate with a screengrab; it’s apparently settled on and being coded as we speak: 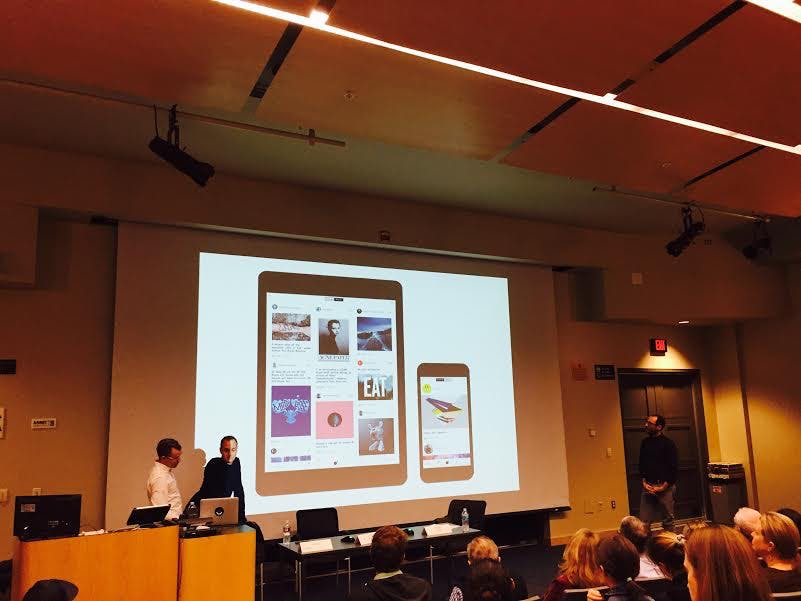 Above, a new design for the next version of Ello, coming very soon.

On the money issues, as one audience member noted with an astute breakdown and the team confirmed, they have raised to date about $6 million total, but all three laughed when noting that they don’t have that much anymore. Its likely they are attempting to raise more now, but made no note of that.

They currently employ between 20 and 25 people and just got together this week for their first all-hands on deck with the whole company to begin working on company culture. They are spread out mostly between Burlington, Denver, and Boulder.

They mentioned an important concept with regards to venture capital which I found really compelling: Prior to their spark in September, Budnitz had upwards of 60 meetings with investors before obtaining the needed buy in to build the first version, referring to his seed round of around $700k that got them to their first 100 users. He noted that because VCs were not interested in hearing a pitch about building a new network that would compete with Facebook,  no one else would be getting VC either, so it indicated to him that there is not likely to be much disruption or competition for that matter. It seems like an excellent observation.

When a kid is bullying, he noted, a nice practice is for all the other kids to go right up to the bully and give them their love, a pat on the back and ask if they are OK.

A couple of questions from the audience touched on scale. The three indicated they suffered from issues of scale. The way they told the story, it sounds like they had to consult quite a bit: “we were told” this and that, but ended up deciding on a quarterly rebuild. They said they have now rebuilt three times and are looking ahead to their fourth. As for development, I found a detailed look at their methods for scaling which you can read here. I asked the author Mike Pack on Twitter how many developers are currently involved: 12.

The founders also took note to indirectly refer to Josh Constine’s Techcrunch article, Ello Pretends It’s Not Over With Video And Music Launch, published a few days ago, an article the tech community seems to agree with moreso than not. Budnitz did not address any of the points in the article or even refer to it directly but told the story of a method used nowadays to handle bullying in school: When a kid is bullying, he noted, a nice practice is for all the other kids to go right up to the bully and give them their love, a pat on the back and ask if they are OK. He said such tech reporters  (i.e. Constine) just need more love (i.e. because they are bullies). It was a fun story and it seems the Ello team has been generally dismissive of the tech community, but it might be worthwhile at this point to give a listen, especially with regards to the cultural implications of censorship, patent ownership, copyright controls, and monetizing users, to name but a few. The more perspectives you can gain from others experience about what you are doing, the more clear your own ideas may truly become.

This piece was originally featured on Andrew Baron’s personal blog, and reposted with permission.