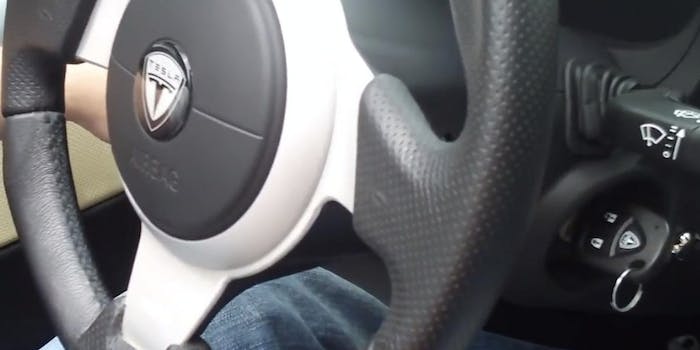 My ride in a Tesla five years ago was a scary trip into understanding the power of an electric car.

I have always been afraid of fast cars, rollercoasters, and elevators that zoomed at ear-popping speed from the ground floor to the top.

So when my friend Josh Baer of Capital Factory fame offered me a ride in his sporty bright orange Tesla in 2009, I reluctantly agreed, wanting to appear super-macho. This was before the popularity of GoPro cameras, so I decided to chronicle my three-ticket ride using one of my handheld video cameras, in order to share my thrill ride through the streets (and freeways) of downtown Austin in case the cowardly lion in me fainted from excitement.

The four-minute clip, with wind rushing in the background, includes a firsthand tour of the car’s instrument panel and some info on how to charge the Tesla (I asked if it was like charging an iPod), using various power sources. For example, we learn that for normal driving, a full charge can take you up to 180 miles.

Keep in mind, this speedy tour took place five years ago, so advancements in Tesla technology have yielded better mileage and even a removable battery. In addition, the futuristic motor company is releasing new models that make the car more financially accessible to mere mortals on a budget.

My Tesla ride with Josh had a major impact. No, I did not cash in my IRAs and mortgage my house for a new spiffy ride; instead, seeing the advantage of having a car that did not totally rely on fossil fuel, I purchased a Honda CR-Z hybrid later that year. With my hybrid going 45 miles per gallon, taking that test drive proved to be an economical and valuable, if not frightening, lesson.