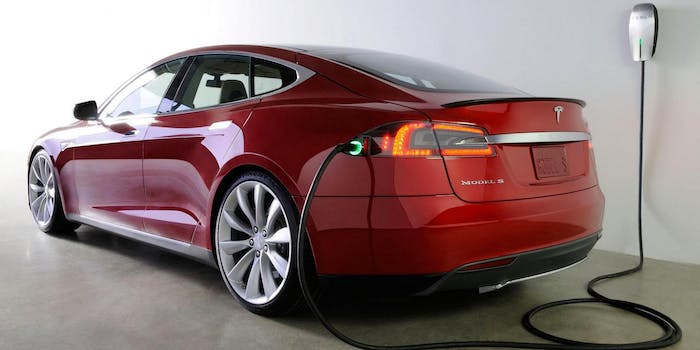 When Zong was not content to wait for Tesla, he took matters into his own hands.

While Tesla may be occupied with the announcement of its newest, cheapest car, a Chinese businessman has been more concerned with expanding the availability of Tesla chargers in mainland China. According to Caixin, after When Zong purchased his Tesla Model S a few months ago, he quickly realized he could not travel between Beijing, Shanghai, and Guangzhou, where Zong is based due to the lack of charging stations on the route. So he bought them.

Zong says he spent over $235,000 to purchase and place chargers in 16 cities over the 3,500 miles needed to travel between Beijing, Shanghai, and Guangzhou. To accomplish this, Zong contacted Wu Bixan, Tesla’s head of operations in China, and made known his desire to purchase and place 20 chargers on the route between the three cities.

Wong then contacted property owners that could handle an influx of electric cars—as the chargers aren’t restricted to only Teslas—and decided to place them at hotels along the route. This would allow him to avoid dealing with the Chinese government, and give people a place to rest while they wait up to seven hours to charge their Teslas. (While Tesla does have a network of superchargers that cut the charging time down to one hour, there are still standard chargers that are designed to recharge Teslas overnight, which is the type Zong reportedly purchased.)

“If we install at hotels, we can handle everything on our own and avoid dealing with property management, power companies and the government,” Zong told Caixin. “Seven hours of charging costs the property owners about 30 yuan [$4.84] in electricity. But if the driver has a meal or spends the night at the hotel, this can become a profit model.”

Tesla did tell the Daily Dot there are plans to expand its supercharger network, but has not responded to a request for comment about its participation in this deal.