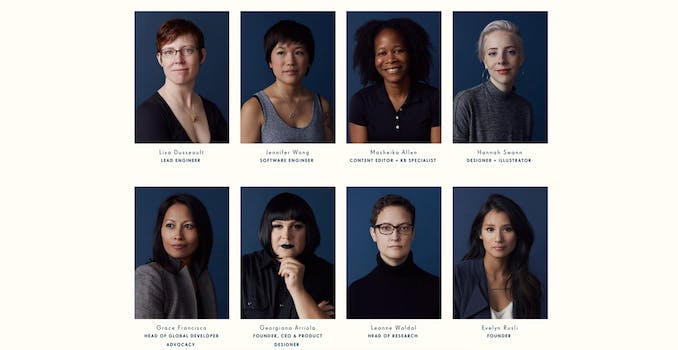 100 stories from underrepresented individuals in tech.

Diversifying the technology workforce is a popular topic in Silicon Valley, with companies regularly showcasing data and numbers to illustrate how they’re trying to improve representation of minorities in tech. The data shows it’s a slow process; last year Apple’s diversity numbers barely changed from one year prior.

What numbers don’t show, however, are the individual stories behind each percentage point.

Photographer Helena Price captured 100 of these stories in the Techies project, a photography and interview series featuring people from underrepresented groups in tech, including women, people of color, members of the LGBT community, individuals over 50 years old, and those with disabilities.

In January, Price put out a call for people to participate in the project, and received over 500 applications. She narrowed it down to 100, mostly from Silicon Valley, from companies like Apple, Google, Dropbox, Uber, Airbnb, and a number of startups.

The participants are designers, writers, engineers, self-taught coders, but they’re also parents, immigrants, activists, formerly homeless people—Price captures bits of their identities through interviews that focus on how each person ended up where they are.

All the stories illustrate the striking lack of diversity in tech. For instance, product designer Tiffany Taylor says in her six years working in technology, she has only met one other black female designer.

“Doing this project, I learned isolation was such a common feeling across basically everyone,” Price said in an interview with the Daily Dot. “For some people, it’s gender-related, it’s sexuality-related, it’s poverty-related, it’s country-related. All these different things where people are like: ‘Where are the people like me?’”

Price presents 100 individuals from underrepresented groups in tech, providing an answer to that question. As a reader, you can filter the stories based on traits like “immigrant,” “person of color,” “disability,” or “freelancer.”

The positioning is meant to be provoking. Calling the project and people within it “techies,”—a term that’s become derogatory and synonymous with entitled tech bros who have infiltrated San Francisco, driving up rents and paying for $4 toast—Price presents a picture of technology workers that are much different than the Silicon Valley stereotype.

The tech industry is meant to take something else away from the project. Price said there are many people who think of tech as a perfect meritocracy, but her project shows some of the complex issues that aren’t documented with demographic data.

Masheika Allen, an editor at a vendor at Google, came to Silicon Valley three years ago after leaving a meandering career in law and e-book publishing. Allen was living off unemployment, staying in hostels and couch surfing before she visited an LGBT meet up in San Francisco to help her find a job.

Allen said that because she works at Google, a company she believes is ahead of the curve in a lot of areas, including diversity, she doesn’t have the same “horror stories,” as other women of color might have at tech companies. But, she said, there is some friction between contractors and full-time Google employees.

The social hierarchy this creates doesn’t bother her, and while Allen has never felt like a “lesser-being,” for being a contract worker at Google, she said there are those who would consider contractors less than full-time employees.

Despite that, she has found a home in Google, and when she briefly left it for a role at Yahoo that did not work out, she found differences in the company’s culture. People would walk by her desk and look at her to make sure she belonged there. Prejudices in tech, she said, are more subtle than those she experienced in law, where people are more open with their racism and stereotypes.

“In tech, I haven’t felt like, ‘Oh, I’ve been treated this way because I’m Black,'” Allen said. “It’s not that I’ve been denied anything openly, it’s more that I haven’t been presented an opportunity. It’s a different side of that coin.”

She believes those opportunities will eventually present themselves at Google. Allen’s is one of the hundred stories that are insightful, heartwarming, compelling, and remarkably honest.

Lydia Fernandez talks about coming out as trans and what it’s like to work as a maps engineer at Uber. Community manager Natasha Vianna describes her journey from teenage mother from an immigrant family to reproductive justice activist and startup employee. Bay Area native Chanpory Rith shares his journey from a child born in a refugee camp in Thailand and immigrating to Oakland immigrating as a refugee during the Cambodian Civil War to startup cofounder.

For Price, looking at numbers is not enough. Building a diverse industry should include listening to the voices of underrepresented people who already work in tech. People should listen to their stories to better understand their needs and frustrations in order to create change.

“You’ve got these people who work at your companies already. Why aren’t we talking to them, why aren’t we learning more about their experiences, what it took to get here, what are the issues that they’re facing that aren’t so explicit?” Price said. “Are they going to rage-quit the industry in five years because their needs were ignored or they didn’t feel like it was a welcoming place for them?”

One hundred stories ask these questions. Silicon Valley has much to learn from their answers.