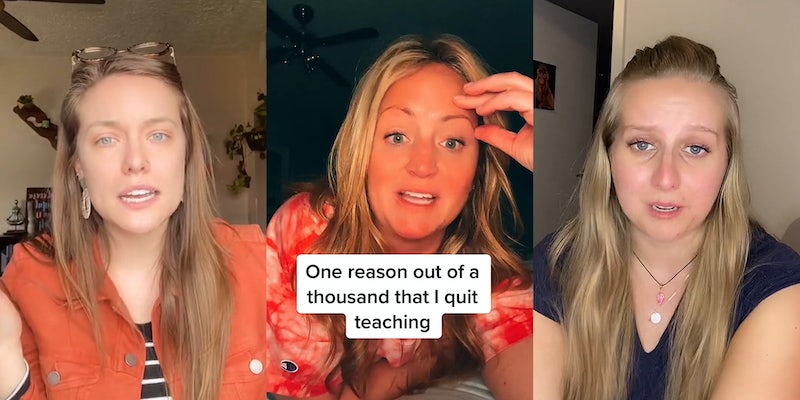 The teachers of TikTok have reached their breaking point

The teachers of TikTok are leaving their classrooms.

A class of influencer teachers has emerged—they live stream during their lunch break, post their students’ work, and bond over the tribulations of the teaching profession. But unlike the 2010s Pinterest-y teacher influencers whose burlap and chevron classroom designs filled feeds, TeacherTok is upfront about the profession’s challenges. TeacherTok is where educators can say they had a miscarriage during class but didn’t receive any flexibility from administration, where they cry at their desk, or where they announce their resignations.

From math teachers in Texas to science teachers from North Carolina to kindergarten teachers of California, teachers are racking up millions of followers and forming collectives like the Teacher Hype House. Some educators, like middle school English teacher Claudine James, who posts at @iamthatenglishteacher, started making TikToks to reach their own students but instead found an audience several orders of magnitude. Ms. James’s straightforward grammar lessons have attracted more than 4 million followers, many who are ESL learners.

But even the visible, valorized TikTok teachers are drowning. Their Amazon wishlists might be fulfilled by people across the globe and their salaries supplemented by brand sponsorships, but the classroom have been enough to wear down even the most dedicated.

Teachers are quitting and they’re posting about it. There is no national database to track the national teacher shortage, but it really is happening.

Florida’s inviting veterans with no teaching background to lead classrooms and Arizona dropped its college-degree requirement. Virginia Gov. Glenn Youngkin (R) announced a “fast-tracking plan,” which gives abridged teacher training to college students and professionals, in an effort to fill the state’s 10,500 job openings. The Bureau of Labor Statistics estimates that the U.S. has lost 370,000 teachers since the beginning of the pandemic. As the U.S faces an alarming teacher shortage, the hashtag #TeacherQuitTok hashtag has 73 million views on TikTok. Some teachers find community, others find permission to leave, and former teachers may realize that what they did was okay.

Two stalwarts of TeacherTok who both stepped back from teaching started a podcast called—surprise—Teacher Quit Talk. In the first episode, released in September, California kindergarten teacher Arielle Fodor, known to her 1.1 million TikTok followers as @mrs.frazzled, shared her feelings: “We’re here because a lot of people quit their jobs and we love that for them. But on a national scale we are deeply concerned,” she said. “Everyone’s quitting. Nobody’s gonna know how to read.”

Mrs. Frazzled spent the pandemic posting several times a day about topics from school policies (some teachers pay for their substitute teachers) to her personal life (she bought a pickle suit). Since her daughter was born in May, she’s been on an extended maternity leave and has started the podcast along with fellow Teacher TikTok veteran who goes by “Miss Redacted.” After amassing 340,000 TikTok followers over the past two years, she decided to quit her job as a history teacher in Florida to work in real estate.

“I don’t want to say we’re screaming into the void because I feel like we’re just all in a circle screaming together,” Miss Redacted said in the podcast’s first episode. Now in its seventh week, the show has interviewed current and former teachers about their ups and downs in the classroom.

Viral #quittingteaching videos started flooding TikTok in the fall of 2021, riding the momentum of The Great Resignation.

A teacher from Albuquerque posted a video of her saying goodbye to her class of eighth graders.

“I am not leaving because of you guys,” she told the students, later making a video to explain that she needed bigger checks over the nine-month school year, but the district only provided smaller checks spread out over a 12-month pay schedule. The spirit of quitting spread like a contagion, and the added challenges of the pandemic—like straddling in-person teaching with Google Classroom and navigating debilitating staffing shortages—pushed teachers to the brink. It doesn’t help that teachers are in the middle of fierce debates about masking, critical race theory, and gender identity, a political game of tug of war where the teachers are the rope. According to a survey from the Rand Corporation, one in four American teachers considered leaving their jobs at the end of the 2020-2021 school year.

It was perceived micromanagement from school administrators that led Lauren Lowder to leave her North Carolina classroom in 2020 to run a tutoring business. She shares her journey to 400,000 followers on an account called @burntoutteachers, posting self-care tips and an almost 80-count “why I’ll never go back” series with nightmare teaching memories.

“Initially I started my account to show burnt-out teachers that there’s another way to make more money and have more freedom,” she told the Daily Dot over the phone.

To her, TikTok is a better place to reach teachers than other platforms. “To see someone in a video makes you feel so connected, and laughter can bring people together. TikTok does that more than any other platform.”

“I feel like an uprising has started,” she said. “Teachers are made to be this martyr—in it for the outcome not the income—but that can be a gaslight phrase and outlook. This year especially, kids aren’t used to being in a classroom and teachers are seeing more challenging behaviors than in the past. Sometimes, you just have to call it quits.”

But it’s not all negativity. Some teachers find solace in the TikTok education community.

“It’s my first year teaching and I got thrown into a tumultuous year,” said Winston Jones, who teaches high schoolers in the New York City Public Schools. “There have been days where I question if it’s worth it. It’s been really hard. One thing I’ve learned from other teachers on TikTok is that you need to advocate for yourself and have a life outside of the classroom doors. I’m not going to force myself to work all night even though it’s so easy to spend all my time on lesson planning, grading, tutoring, or extracurriculars.”

Gabe Dannenbring, a middle school teacher from South Dakota, garnered 1.3 million followers for sharing funny tales from seventh grade, and he’s also developed friendships with TikTok teachers from across the country. “It’s a close-knit world. I’m in a group message with 8 or 10 TikTokers who communicate a few times a week, talking about school, business, content, and just the world we are in.”

“One reason I keep going with social media is because I make money off of social media,” he said to the Daily Dot. “If not for that, I’d probably have to pick up a second job.”

Thanks to his massive platform, he’s been able to score corporate donations for his school, including a Chromebook giveaway, Little Debbie snacks, and Kahoot merch. And after poking fun at the notoriously nonabsorbent public school paper towels, he received a huge supply of paper towels and tissues from Bounty and Charmin.

But for every influencer who has struck gold, there are so many who are still working amidst limited budgets and a perplexing staffing shortage.

Ultimately, burnt-out teachers have to make an impossible tradeoff: leaving the classroom might help a teacher’s well-being, but hurt already-struggling schools.

“I don’t know all the answers,” said Lauren Lowder. “but I think things might have to get worse before they get better.”

Annie is a writer, comedian, and Wikipedia enthusiast. Previously, she has written for Slate, Input, Vice, and The Believer. She can be found on Twitter at @anniierau.