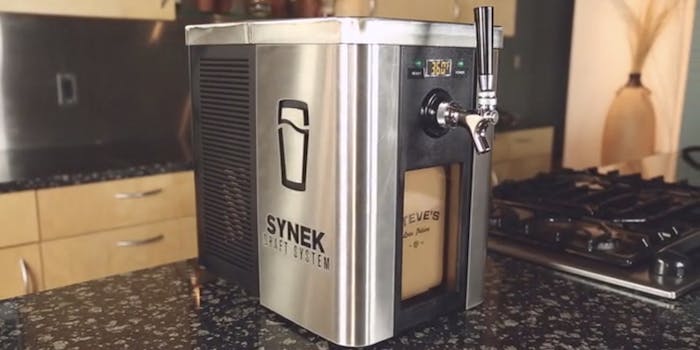 Introducing SYNEK, the machine that turns your kitchen into a home brewery

Frathouse keg stands are about to get a lot more high-tech.

While there are few things more obnoxious than someone who brews their own craft beer, that hasn’t stopped countless neckbeards from attempting to do so, often while using the term “robust hops” unironically in casual conversation.

To cater to this demographic, as well as to those who just want to impress their friends with their sexy new alcoholic libation dispenser, entrepreneur Steve Young has created SYNEK, a crowdsourced portable taphouse that pours pretty much any beer your heart desires. Young says it has “the convenience of a Keurig coffee machine, the volume of two growlers, the spirit of a falcon, and all the variety you’ve ever wanted.” Well, OK!

SYNEK, which just kicked off a fundraising campaign on Kickstarter, is a dispenser about the size of a toaster oven that lets you pour about eight pints of beer per cartridge. It’s relatively small and portable, so you can use it anywhere you have access to an electrical outlet.

All you have to do is fill the machine’s cartridge using a simple adaptor, either from a keg or right from the tap. After you put the cartridge in the SYNEK dispenser, the machine will dispense beer according to your temperature and pressure preferences.

According to Steve Young, a former stock analyst and now the founder of SYNEK, the idea for a home beer dispenser was born when he, like many other 20 to 30-something men, started developing an interest in craft beers.

When he started talking to brewers, “I realized that they all suffered from the same problem: They struggle to get their beer into peoples’ homes,” Young wrote in an email. “Literally, all 30 brewers across seven states said the same problem and it was all due to poor packaging.”

For brewers, packaging, regardless of the size of their brewery, is both time-consuming and expensive; it’s also difficult to store beer for months while retaining its freshness. Young consulted with a team of beer and flexible packaging experts to develop SYNEK as “a way craft brewers could better engage consumers.”

If this sounds a little bit like Frankenalcohol, you’re not wrong: For most beer snobs, the idea of drinking a prepackaged beer is probably more than a little bit off-putting. (Oenophiles had a similar response to the Miracle Machine, a device we wrote about earlier this year that literally turns water into wine.)

Young says that while most brewers have been enthusiastic about SYNEK, “yes, there are some breweries that will only fill their grass growlers, or won’t fill anything at all.” That having been said, “access to 90 percent of the craft beer in the US, or over 90,000 different brands, isn’t bad.” Welcome to the future of alcoholic beverage consumption.