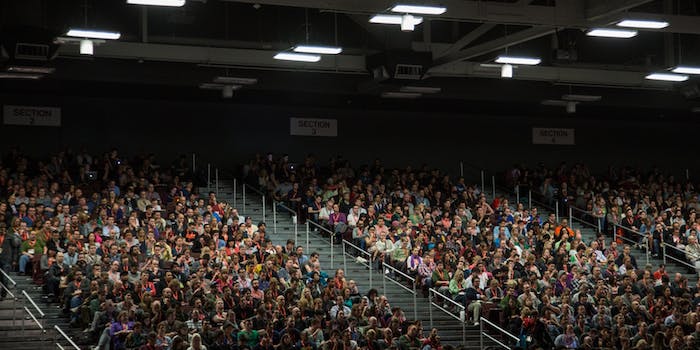 The most cringeworthy quotes from SXSW Interactive so far

Things you never thought a human being would have to say.

While plenty of people are at Austin’s South by Southwest festival right now just to see films and live music, some 30,000 arrived with an eye toward what’s called SXSW Interactive. For the uninitiated, those are the panels and speeches in which horrible developments in technology and Web culture are discussed using maximum jargon.

Would we expect any less from a “unique mix of uber-creative professionals”? I think not. But much of what we’re hearing out of this conference is sad, scary, and a bit insane out of context. The Social Business Shake-Up and opening keynote address from writer/artist Austin Kleon accounted for some of the wackiest quotes, though there was no shortage of fawning hyperbole, tortured analogies, vast generalizations, or rash predictions. The future is here!

You are 100% in charge of your life. Stop “complaining.” @garyvee #SXSW #SXSWi

The biggest social shakeup at #SXSWi is Predictive Analytics because we must better optimize content. http://t.co/72wdIPwTi5 #socbizshakeup

“Those who embraced #social early were the change agents within their organizations.” –@robincarey at #SocBizShakeUp. (Can you relate?)

Parents are now finding they need to have the data permanence talk before the birds and the bees talk, @JaredCohen says. #NewDigAge #SXSWi

You don’t want to be in the print business. It’s not trackable and it’s shrinking. #digicronut #sxswi

“I spend my time studying people to see how I can provide them value”-@garyvee #sxswi pic.twitter.com/Yv74Ormahi

Forget about being a genius. Just become part of the scenius. Don’t become a human spam! Open your ears! Listen! Close your mouth! #sxswi

So meta! Opening keynote with @austinkleon starts with question “Is #SXSWi over?” #ShowURWork

do brands fit in with wearable counting? #DoBrands #SXSWi

Vampire test: if u leave someone feeling drained,they’re a vamp. If you leave feeling energized = not. Vamps can’t B cured. Rid them! #sxswi

If you work for a large corporation, neo sharers are disrupting your market #smdata #sxswi

How do you beat search engine conflict–use a ghost chair!! #SXSWi (have to be there)

¨Every brand did not need their own harlem shake. This is not how we create a brand/marketing strategy.” #viralsucks #SXSWi

#sxswi is more than parties: a panel made solid points on how to engage minorities on social w/o sounding condescending #gloverparkgroup

We need a 3d printer like #DeloitteSXSW so we start printing gnomes. #SXSWi pic.twitter.com/EeutWgHrle

The future of digital will either happen to you, or because of you. @briansolis #bisummit #sxswi

With all this cultlike enthusiasm and the general lack of self-awareness, we’re glad to see not everyone was in high spirits:

We’ve got a boat on Lake Austin we will take you on a real ride & video it! @RealGrumpyCat I HAVE A BOAT #SXSWi #SXSW pic.twitter.com/niwao8orLh

If Grumpy Cat didn’t have a reason to be ticked off before, she certainly does now.