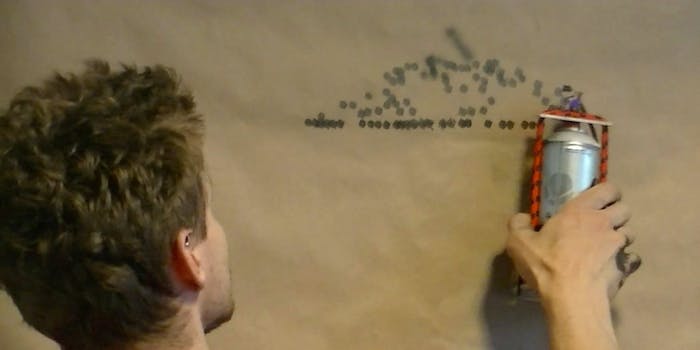 Just about anyone can get their hands on a can of Krylon and make their way to the nearest train yard, but tagging a couple squiggly lines on a boxcar doesn’t make you an artist. Thankfully for your inner artist—and for the public’s eyes—SprayPrinter is here to turn your stick figures into modern pieces of pointillism.

The piece of tech is basically training wheels for the young graffiti artist; it snaps on to the top of an aerosol paint can and produces a picture-perfect image as its moved across the canvas.

SprayPrinter consists of two separate modules that work together to produce complex images out of a simple spray can: there’s the printer and the camera.

The printer, which is the attached piece that attaches to the paint can, controls the nozzle and produces the dotted paint pixels that eventually come together to create the final image. As for the camera, instead of installing a built-in lens into the device itself, SprayPrinter delegates the duty to the camera in your smartphone.

SprayPrinter communications manager Sirje Joala told the Daily Dot that the smartphone’s camera is used by a companion app that tracks the position of the printer.

“SprayPrinter mobile app breaks an image down into pixels, calculates their exact position and tells the printer exactly when to open the valve. The result is an image that is printed on the wall one pixel at a time,” Joala explained. “The application controls printing of the pixels on the wall, avoiding repeated layers and identifying any missing pixels.”

If you think that means you still have to be a good enough artist to create the image digitally first, don’t worry; SprayPrinter will let you tap into a community of artists infinitely more talented who would be happy to let you put their pictures on a wall. For the entrepreneurial graffiti artist, it’s basically like getting paid to have someone else put your tag up.

While the app is still under construction at the moment, the SprayPrinter team hopes to attract artists who will create and sell their own designs through a digital marketplace. “Anyone interested in printing the design can download it from the same place by paying the fee that the artist has set,” Joala said.

The price for the images will be set by the artist, with a range that stretches from free to $200. It’s not difficult to imagine the potential for commissioned and custom work through this system in the future.

It’s also not too hard to see the system getting abused by people putting up copyrighted images or trying to make a buck off of someone else’s work. Joala said artists will only be allowed to upload their own work, but did not provide any detail as to how that will be enforced. But if you’re aiming to tag up a building, you’re probably not too worried about laws anyway.

While the inspiration for the SprayPrinter initially came from graffiti, Joala explained that it’s a about much more than enabling a new generation of street artists.

“The idea is to make art available for everyone, to bring it everywhere,” she said. And the device isn’t just meant for tagging up overpasses and abandoned buildings—it can be used indoors as well. So whether you’re trying to spruce up your room or the neighborhood, SprayPrinter will make it look like you know what you’re doing.

SprayPrinter is set to launch on IndieGoGo sometime in the next month. No retail price has been set for the device—though given it’s ability to produce pictures, it’s probably worth about 1,000 words.