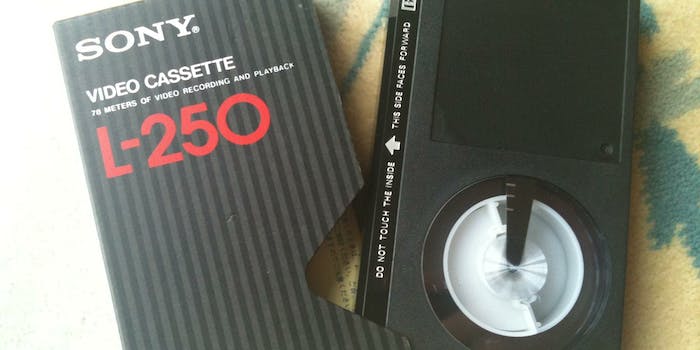 Photo via Jonathan Baker-Bates/Flickr (CC BY 2.0)

Betamax has been alive this whole time, but Sony’s about to kill it for good

There’s good news for fans of vintage media: Sony is still selling Betamax tapes. But don’t put off your purchase for too long, because the company will officially end shipments of the format by March 2016.

Sony will also take MicroMV camcorder cassettes, the smallest videotape format, off the shelves at that time.

The failed Betamax format, introduced in 1975, was meant to go toe-to-toe with the VHS, but it never found footing in the United States or other major markets. After nearly two decades of trying to make it stick, Sony gave in and began producing its own VHS players in 1998. It formally discontinued the Betamax player in 2002, but it has continued selling tapes for the players in the intervening 13 years.

And the tapes persisted—but only in Japan. “We had continued to ship the recording tape media for both applications only in Japan until today,” a Sony spokesperson told the Daily Dot in an email.

The Betamax loyalists, if there are any left, will have to scoop up whatever they can find before Sony officially makes the tapes vanish forever.

The company is still shipping EL-500B, 2L-500MHGB, and 2L-750MHGB cassettes, as well as L-25CLP cleaning tape, for the Betamax, and the MGR60 tape and MGRCLD cleaning tape for the Micro MV.

Sony “will finish shipping all of them by March 2016,” the spokesperson said. At that point, it “will end the the business in Japan.” It has already listed Betamax tapes as out of production in its Japanese store.

Rest in piece, Betamax. We all assumed you were already dead—but now that we know you’re still clinging to life, we only have enough time to bury you.

H/T The Verge | Photo via Jonathan Baker-Bates/Flickr (CC BY 2.0)