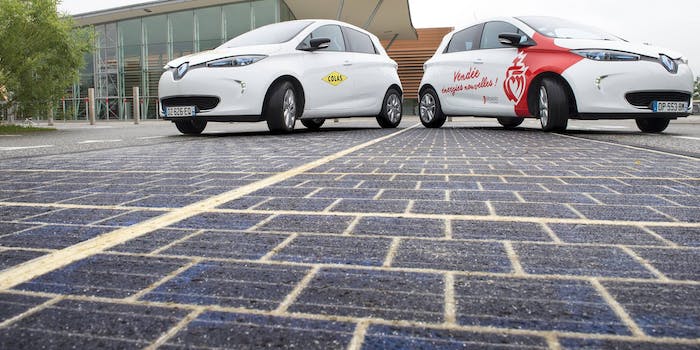 Feel the power under your wheels.

The five-year project cost $5.2 million and covers 30,000 square feet of road. That price per square foot isn’t anything to write home about, but consider the fact that it is the first of its kind. The kilometer stretch roadway is said to generate enough electricity to power its own street lamps. The street’s power output isn’t helped by some design limitations. Each of the panels must (of course) be installed flat to the road. This makes them much less efficient than their slanted rooftop counterparts. The silicon resin-coated tiles are also very expensive, though panel-manufacturer Colas is hoping economy of scale will help out with that as cities pursue similar projects in the future.

The company’s ambitions are shockingly big. Each solar cell-powered tile will have hundreds of “smart” LED lights in multiple colors rigged to a circuit board, allowing the road to change its markings in real time to denote hazards ahead. The company says there will also be heating elements, keeping the surfaces just above freezing to eliminate dangers caused by icy roads.