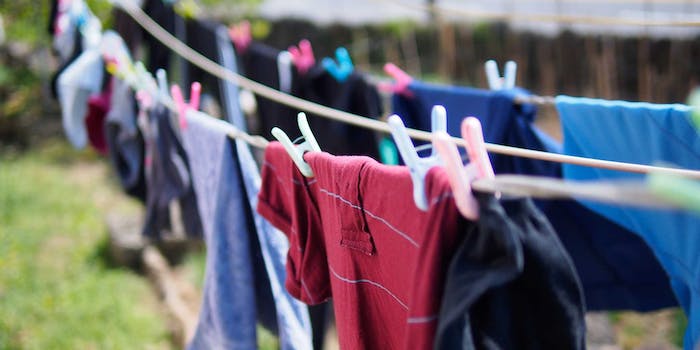 You can most definitely wear white pants after Labor Day now.

The accident-prone may be able to wear white with reckless abandon now, thanks to a new fabric softener being crowdfunded on Kickstarter that promises stain-free clothing.

It’s called Sofft, and works in tandem with standard detergent to help get clothes squeaky clean. By pouring Sofft into a load of laundry, it “coats organic and plastic fibers in a thin protective layer of hydrophobic molecules.”

This seemingly revolutionary product wouldn’t eliminate the need for future washing, but it would certainly increase the number of wears between washes, and effectively reduce the overall number of your laundry loads. This would save the consumer time, money towards the energy bill, and water used toward laundry. Certainly something to make environmentalists smile.

Not only is this a game changer for people unable to eat without sharing it with their pants, but it could also have long-term repercussions for the entire laundry industry. Sofft’s founder and CEO Vinod Nair told Popular Science “we would expect an ecosystem change. The washing machine would have to change.”

The Kickstarter campaign to help fund Sofft, and it’s already exceeded its $25,000 goal by more than $10,000. Nair expects orders to ship in February 2015, but right now the cost per unit could prevent Sofft from becoming the magical laundry product of the future. One $35 bottle lasts for about 15 loads, a price that might be prohibitive for the average laundry doer.

Nair’s long term goal is to get the price down to $10 per bottle and have it on shelves at Walmart, a product distributor’s dream. And he’s taking this fight seriously.

“The cleaning products industry is still at Laundry 1.0, but with Sofft™ we expect to make prevention based laundry a reality and change the perception that stains are inevitable,” Nair writes on his Kickstarter page. “Together with our backers we will make Laundry 2.0 a reality by starting a ‘Say No to Stains’ campaign, or as we like to say, lead a Sofft™ Revolution!”