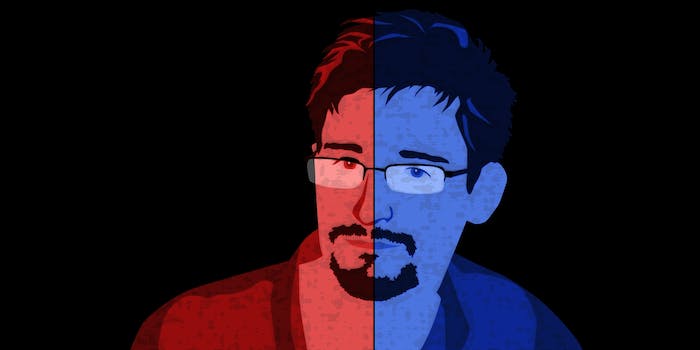 So why is everyone reporting that he did?

It doesn’t appear that this ever happened.

Snowden’s manifest was initially published in the German, in the magazine Der Spiegel. It has since made its way around the Internet, where it was translated into English. (The translation quoted in this piece was translated by a bilingual blogger, Martin Eriksson.)

For the most part, the content of the five-paragraph manifesto is not in itself particularly revelatory. Snowden argues that surveillance operations are a human rights issue that must be debated in public. It’s an unsurprising opinion for a man in his position.

More notably, Snowden uses the manifesto to publicly, if not directly, call out the U.S. government for criminalizing his leaks. He wrote that after he revealed the extent of NSA spying—which includes taping Internet cables, collecting phone metadata, breaking encryptions, and storing emails, photos, videos, and chats of people around the world—“some governments” felt embarrassed and “initiated an unprecedented campaign of persecution to suppress this debate.” But now, he argued, “we know that this was a mistake. … To tell the truth is not a crime.”

This sentiment appears to have prompted news outlets to add in their reports of the manifesto that two days earlier Snowden requested clemency from the U.S. government: “His official request for clemency was released Friday after Snowden gave the one-page typed letter to a German politician,” wrote NBC.

On Monday, however, the former Guardian journalist Glenn Greenwald, who worked closely with Snowden, tweeted that this request was never made:

Greenwald did not respond to request to comment. However, there’s reason to believe him: He appears to be one of the only journalists with a direct line to Snowden.

White House spokesperson Caitlin Hayden told the Daily Dot that “clemency is not something being considered at this point.” She added that to her knowledge no such request had been made.

So where did the clemency rumor get started?

It appears that, as Greg Mitchell pointed out in a blog post at the Nation, media outlets are sourcing Snowden’s clemency request to a letter he wrote to German chancellor Angela Merkel on Friday.

Curiously, the letter never mentions clemency. In it, Snowden discusses that under certain conditions he would be willing to come to Germany to aid in the country’s investigation of NSA spying. Germany’s inquiry began in earnest after documents disclosed by Snowden revealed that the NSA had tapped the leader’s personal phone. If anything, the letter is Snowden’s request for asylum in Germany, not clemency in the U.S.

Germany has an extradition treaty with the U.S., and it is unclear they would be able to circumvent it for Snowden’s testimony. However, it still seems much more likely a possibility than clemency from the U.S. As Hayden put it, “Our position is clear: Mr. Snowden is accused of leaking classified information and faces felony charges here in the United States.  He should be returned to the U.S. as soon as possible, where he will be accorded full due process and protections.”

Why the document was mistaken for a clemency request is unclear. Stranger still, Senator Dianne Feinstein (D-Calif.), the head of the Senate Intelligence Committee and an open critic of Snowden, seemed to respond to NBC as if such a request had been made. “I think the answer is no clemency,” she told the reporter.

Ultimately, it would appear Feinstein is right: There will be no clemency. Neither she—nor Snowden—want it.