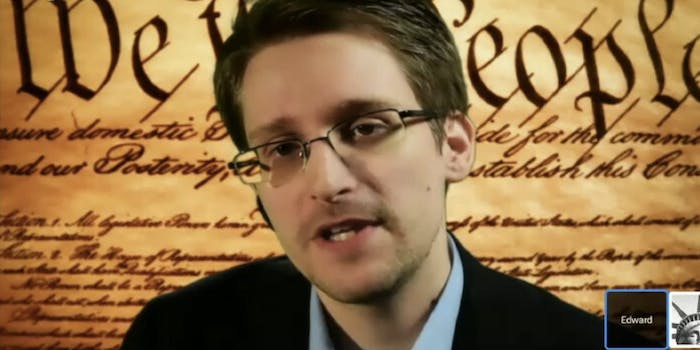 Snowden at SXSW: NSA is ‘setting fire to the Internet’

Because the NSA is "setting fire to the Internet."

Edward Snowden addressed the American and tech public directly for the first time Monday, at the South by Southwest technology conference in Austin, Texas. Snowden stressed one thing one thing above all else: Encrypt your online communications so that it’s not so easy for the National Security Agency, where he worked before leaking scores of agency documents to the press, to collect them.

Because the NSA is “setting fire to the future of the Internet,” Snowden said.

He didn’t attend in person, of course: he streamed in his video from an undisclosed location in Russia via a Google Hangout, with a green-screened U.S. Constitution jarringly displayed behind him. He was interviewed before a large crowd by two ALCU higher-ups: Ben Wizner, who legally advises Snowden, and Chris Soghoian, its Principal Technologist. Wizner said the video stream was slow because they went through seven proxies, which was likely a joke. Google Hangout regulars will attest Snowden’s choppy video isn’t uncommon for the service.

Snowden doesn’t give a lot of interviews, and this was his first public talk for an American audience since he settled in Russia after leaking scores of NSA documents in June, 2013. Choosing SXSW was a pointed decision, and it’s not because of some devotion to tech hipness. It’s technology, he said, that stands to make the best, most immediate impact on the NSA’s ability to spy on the Internet.

“They’re the ones who can enforce technical standards” when U.S. law hasn’t caught up, he said.

That’s a recurring theme of Snowden’s message. While it’s not practical to think of stopping the NSA’s ability to hound a particular target, it is feasible for normal users fight back against the agency’s desire for “blanket surveillance,” he said. He noted in particular how the NSA has tried to fight encryption, like creating backdoors to access everything from iPhones to computer security company RSA.

Soghoian and Wizner noted that even if someone considers Snowden to be a criminal for his leaks, they’ve had one indisputably positive effect.

“His disclosures have improved internet security,” Winzer said. Soghoian noted that “companies like Yahoo email have “secured connection from your computer to their server,” though they’re not necessarily safe once Yahoo gets them, and called for comprehensive, end-to-end encryption instead.

Responding to a question from Tim Berners-Lee, the man who founded the World Wide Web, Snowden said that some existing government oversight of spy programs should work in theory, he said, but failed in practice.

Members of the Senate and House intelligence committees are in bed with agencies, he said, and Director of National Intelligence Jeff Clapper was able to “to lie to everyone in the country, to Congress.”

Which brought him back to encouraging everyone to encrypt their communications.

“It’s the defense against the dark arts for the digital realm,” he said.