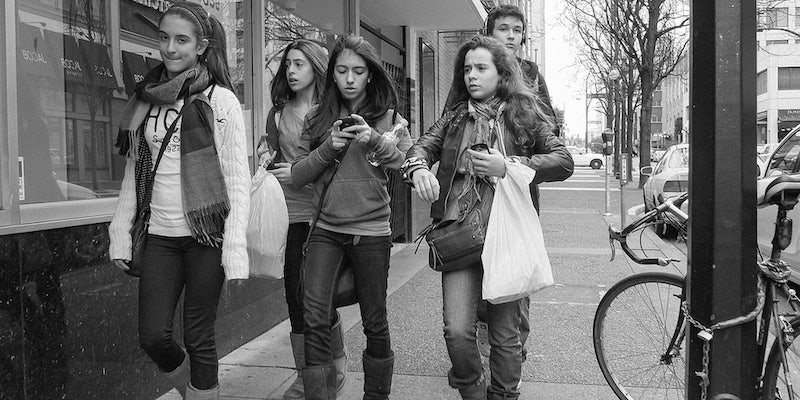 If Snapchat and Secret had a baby, it’d be anonymous messaging app Sneeky

Sneeky lets you send anonymous picture messages. Is there any way this won’t be used for dick pics?

Hide your kids, hide your Anthony Weiners: There’s a new phone app out and it probably couldn’t be better for sending shots of your junk to strangers.

Sneeky, a new app that will probably give a few mothers substantially higher blood pressure, lets users send anonymous messages. Like Secret, people on your phone contact list can see messages posted and won’t know who sent them. Like Snapchat, you send photo messages to your friends by taking pictures. To send someone a message, you have to add them to your phone contact list (though, of course, you can add just about any phone number to your contact list so this isn’t exactly a robust safety measure).

The app is aimed squarely at teenagers; one of the founders, Draw Something designer Garett Peek, told TechCrunch that Sneeky wants to capture the 16- to 24-year-old crowd. “They are on mobile, and are concerned about their public reputation,” he said. “Sneeky gives them a way to interact privately with their friends in an uninhibited way.”

Sneeky created a privacy setting where users can select to only receive “sneeks” from people on their contact list already, to prevent messages from strangers. But it’s not the default setting. And even for people who do select the higher privacy of mutual contacts, the app still allows your contacts to send you images under the assumption that you won’t be certain it came from them, which could encourage the proliferation of body parts seen on the app.

There’s not a single app with anonymity as a core feature that hasn’t had problems; Secret just had to establish a warning system for trash-talking users, and platforms like Ask.fm have received criticism for facilitating bullying, in part because they allow anonymous speech. This isn’t to say that anonymity should be disallowed on apps. But it is to say that you’d be sticking your head in the sand if you introduced a new app for teens that hinges on anonymous messages without realizing there’s huge potential for abuse. Sneeky’s current set-up is pretty lax, but they are working on bolstering ways to police the app. “With our next update, we are also implementing blocking, where you’ll be able to block a user based on a photo,” a spokesperson told the Daily Dot.

Even though they’re aiming at 16 and older, Sneeky allows people as young as 13 to sign up, and it’s a flimsy honor system when it comes to younger kids. “We ask for your age in the registration process and you’re not able to sign up if you’re below 13,” a spokesperson said. The complete and utter ineffectiveness of age gating isn’t unique to Sneeky, but with an app like this—so ripe for abuse—I had hoped they might have put more thought into it.

But look, I’m not the dick pic police, and there are aspects of this app that are undeniably appealing: It’s a fun way to remind a friend of an inside joke. It could be a fun way to flirt. For people who like Snapchat but wish the pictures didn’t disappear and you didn’t know who sent them, it’s like the holy grail of apps. (That’s a pretty specific wish, but that’s cool.)

Since Sneeky is so new, most users’ initial experiences will be barren. I had no one to send sneeks to when I tested it. But if it catches on, the anonymity-and-photo-message combo could be an appealing mashup for young people looking for new ways to be goofy (and maybe super creepy).