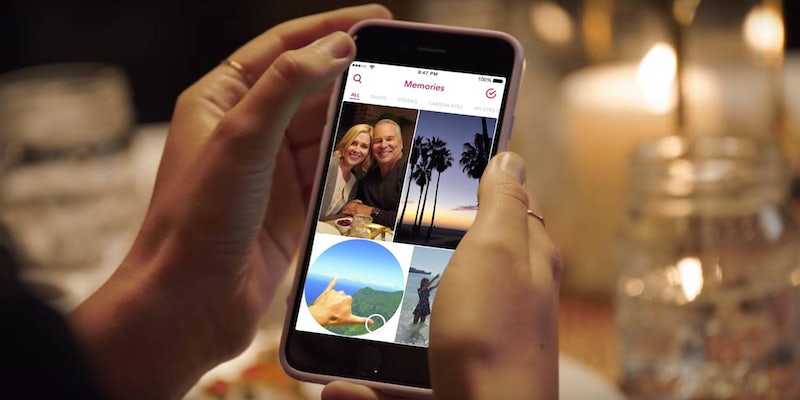 Not all snaps disappear.

The photos and videos you share on Snapchat no longer have to disappear forever. A new feature called Memories, unveiled by the company on Wednesday, makes it possible to save and share old snaps to a private archive.

Memories, which will be available immediately to Snapchat users, adds a new section to the app that will house saved snaps. Instead of downloading photos and videos from the app to your phone, the content stays on Snapchat’s servers to be accessed at will.

Users can access memories by swiping up from the main camera screen. What they’ll find is an archive of images and footage they’ve decided to hold on to, presented in reverse-chronological order. The layout presents rectangular posts—which are individual snaps—and circular posts—which are stories, complete with a live preview of the content within.

While the snaps housed in Memories are old, they can still be used and edited like any other snap. Users will be able to add geofilters to the photos and videos, even if they are no where near where the snap was taken. The snaps can be added to a current Snap Story—a 24-hour collection of photos and videos—and is identified with a white frame and timestamp.

Perhaps most interesting feature of Memories is the addition of a search function that allows users to find snaps based on where they were taken. Snapchat claims the search is also able to identify specific objects, with “hundreds” of terms like “sunset” or “ocean” that will surface results. Object recognition is processed on device rather than in the cloud to ensure privacy for the user.

Another bit of personal privacy that Snapchat has included in Memories is a vaulted section called “My Eyes Only,” where snaps that are off limits to others can be saved. A PIN code protects the images, and if the PIN is ever lost or forgotten, then so too are the snaps.

Snappers who can’t wait to start saving to Memories can update their Snapchat app and start using the feature. For iOS users, Memories appears in update 9.34.0.0. The version of the app will vary for owners of Android devices depending on what version of the operating system they are currently running.