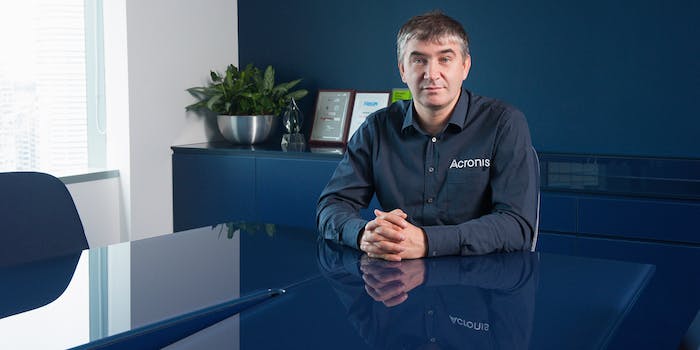 Talking quantum physics with the Russian king of data

Beloussov is a guy with a lot of interests.

You can’t talk to Serguei Beloussov about just one thing. My conversation with the Russian-born technologist began with talk of data protection and backup, delved into quantum physics, then concluded with the implications of free will.

The 43-year-old polymath has his hand a number of pursuits. Beloussov is executive chairman of the board and chief architect of Parallels, the company best known for software that enables Apple computers run a Windows operating system. He’s co-founder and chairman of the board for enterprise software company Acumatica and a founding partner of tech investment fund Runa Capital. Then there’s his ambitious pursuit of quantum physics: Beloussov is co-founder of QWave Capital, a separate investment fund specifically focused on quantum technology, and he’s chairman of the board of trustees for the Russian Quantum Center.

Today Beloussov is focused on his role as founder and CEO of multinational data backup company Acronis. The company’s American headquarters are located in Burlington, Massachusetts, a pleasant 45-minute bike ride from downtown Boston. The office space is painted a deep shade of blue in keeping with the style of Acronis’ 17 other offices around the globe, but this one’s “not blue enough,” says Beloussov.

“I have partners who handle the other things,” he told me in his still-very-blue office. “I was focused on Parallels, then I was focused on Runa, now Acronis. The quantum things are sort of a hobby. They are still a business, but even the CEO of Acronis is allowed to have hobbies.” When he’s not engaged in his hobby, he’s thinking very deeply about how we interact with our computer data, and how Acronis can best protect it. 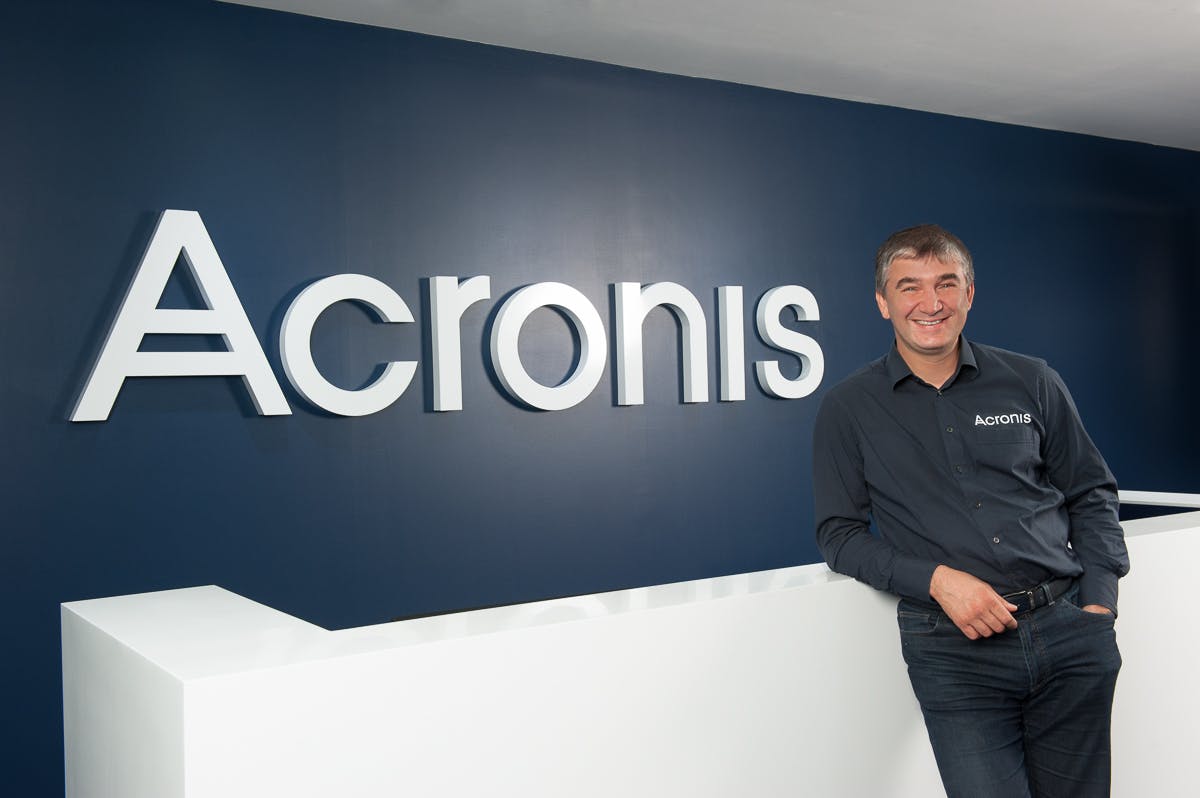 As Beloussov explains it, there are “three situations with data.” The first is for consumers, the second is for businesses, and the third is for big businesses. Each one of these requires its own solution, as each operates with drastically different scales of data. A consumer may only need to protect a few hard drives’ worth of data, a business several servers, and a big business many thousands of servers. There is no “one size fits all” when it comes to backup, so Acronis varies its offerings to appeal to as many as possible.

“People have to protect their data,” said Beloussov. “They understand it’s important [to do so] but don’t want to have to think about it. Ideally they could just magically protect it. The reality is that hard disk failure rate is about 3 percent per year for servers, and it’s probably more for personal computers. Even if it is 3 percent, a single hard disk may run 30 years without failure.” This is where a consumer’s hubristic “it won’t happen to me” attitude comes from: Not all hard drives fail, except for when they do.

“Our goals are modest: just $10 billion in revenue.”

Bigger businesses already inhabit the proactive mindset that consumers ought to strive for with respect to data protection. Beloussov says that there’s an 8 percent failure rate per year for servers. If you run a single server for your business, there’s an 8 percent chance it will fail. If you run 10,000 servers for your business, there’s a 100 percent chance that 800 of them will fail. “In large businesses, backup is not a question. All data is protected. They lose and restore data all the time. It’s just probability,” he said. “How often do your relatives get hit by a bus? Probably not often, but a lot of people get hit by buses.”

But your equipment doesn’t need to fail in order for backup to make sense—your equipment can simply disappear, too. “A computer is a valuable part of a business, and computers get stolen. This is why you need to backup to the cloud. All our products are available as a cloud service. If you don’t do cloud, you’re not really doing backup.”

Beloussov has had his own experience with theft: “At Parallels, we had all of our computers stolen at one point from our office in Seattle. The FBI caught them three years later, but it doesn’t matter—you can’t go without data for three years. Theft happens. It’s a matter of when, not if.”

“Large businesses have the highest tolerance for complexity, the consumer has the least—basically none,” he said. “Most consumers have a relationship with their ISP or some telephone or hosting company. We believe that company should offer the backup service while we provide the software to them—say Verizon or GoDaddy or a hosting company—and they offer it to their customers. The customer will get [their data backed up] as a part of an integrated service. That’s the easiest way for the customer to [get their data backed up], and our goal is to protect every piece of data for every person.” 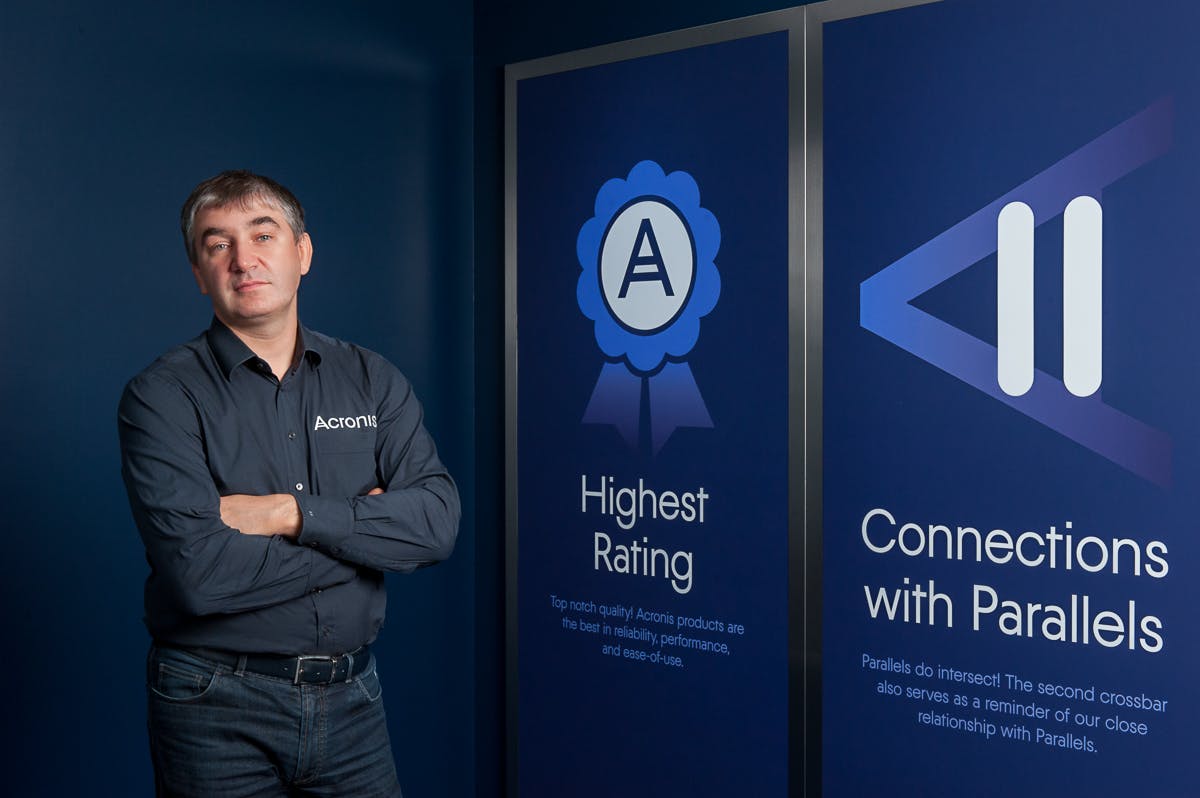 Beloussov’s interest in backup and security is multiplied by his interest in quantum physics. New quantum technologies make it possible to transmit data in such a way that if anyone except the intended recipient intercepts that data, it is destroyed and made worthless. Compare this to conventional digital data—if someone intercepts it, they have exactly what you sent.

“Quantum technology is will be extremely widely used at some point in the next, say, 30 years. It’s an interesting phenomenon—governments wonder ‘Oh, what can we do with that?’” said Beloussov. His QWave Capital fund invested $5.6 million in ID Quantique, a tech company presently selling quantum technologies for these super-secure communications. Quantum communication networks are already being set up in Denmark and other countries, and ID Quantique is positioned to only become more valuable as similar networks spring up around the world.

Beloussov’s steady contemplation of the quantum means he’s glad to entertain somewhat metaphysical ideas at that eerie intersection of science and philosophy. You’ll recall from above that digital data and quantum data are only different in one way: digital data is easily copied, quantum data is destroyed when it’s copied—true security only exists for quantum data. Operating off of this single point, he dropped a philosophical bomb:

“All our products are available as a cloud service. If you don’t do cloud, you’re not really doing backup.”

Spooky. This is simply not the way one is accustomed to hearing leaders of large businesses speak. And backup is indeed a large business—companies lose $1.7 trillion per year due to data loss, and the trend is that companies lose more data every year, according to the EMC Global Data Protection Index. Beloussov estimates that $100 billion dollars is spent on protecting data every year, with $10 billion going toward vendors and $90 billion toward configuring systems and paying for electricity. This is a “conservative estimate” and it’s “probably more. We believe it only protects a portion of the world’s data. We have to commoditize this market to make it super easy, super complete, and super efficient so that every piece of data can be protected. Doing this with cloud service is the right way.”

The future looks bright for Acronis. Beloussov is an uncommonly energized leader, wholly committed to making the company as big a deal as it can become. When I asked about Acronis’ specific goals down the road, he smiled.

“Our goals are modest: just $10 billion in revenue.”