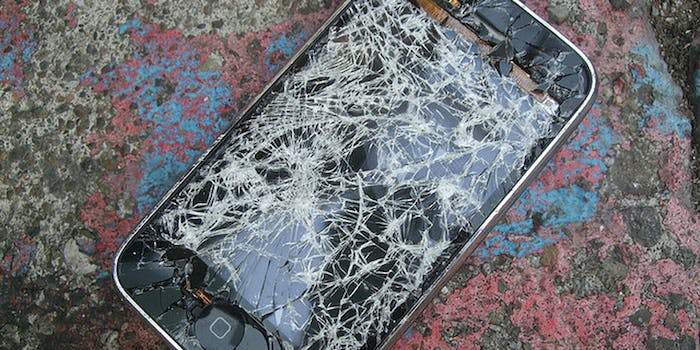 There’s a scientific reason you shatter your phone’s screen

Phones have something in common with toast

If you’ve ever wondered why your phone always seems to land face down when it tumbles out of your hands, there’s a scientific explanation.

Motorola hired researcher Robert Matthews to study the phenomenon. He’s a good pick too. In 1995 he penned a study titled, “Tumbling toast, Murphy’s Law and the fundamental constants.” The study won an Ig Nobel prize in 1996 for the achievement of “making people laugh, then think.”

Matthews found that we tend to hold our phones loosely and below their center of gravity, creating the optimal tumbling trajectory for the phone to land on its screen and shatter.

It’s so weird because of the intermediate axis theory, Muller explains in this video.

So if the phone is flipping out of your hands in a similar way, perhaps it also has the same problem. The Daily Dot reached out to Matthews but he didn’t say whether or not the intermediate axis theory would affect how the phone fell.

Probably the best way to avoid this ill fate is to simply be careful when holding your phone and invest in a good case that protects the screen.