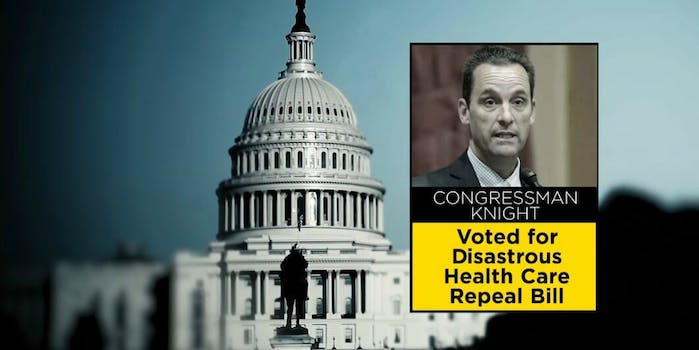 Screengrab via Save My Care/YouTube

The GOP has come under fire across the political spectrum for its passage of AHCA.

It hasn’t taken long for liberal groups who want Democrats to win back the House of Representatives in 2018 to start blasting GOP lawmakers who helped pass the American Healthcare Act.

With House Republicans passing the AHCA last week 217-213, an advocacy group called Save My Care has unleashed a new commercial blasting the most potentially vulnerable GOP representatives who voted for the bill.

As the Huffington Post reports, Save My Care has targeted 24 Republicans with $500,000 worth of television and digital ads and asked a simple question: How could you do this to us?

And one for Rep. Steve Knight (R-Calif.)

And one for Rep. Carlos Cubello (R-Fla.)

The commercials, though, might not be the only problems for Republicans. Idaho Rep. Raul Labrador was lambasted by constituents on Saturday when he said at a town hall that “nobody dies because they don’t have access to healthcare.” And House Speaker Paul Ryan (R-Wisc.) was massively trolled by this dude wearing a “Repeal and go fuck yourself” T-shirt.

But perhaps the biggest impact won’t come from a group like Save My Care, a healthcare advocacy organization that tilts left. It could come from more moderate Republicans like Ohio Gov. John Kasich, who has called the bill “inadequate” and “ridiculous.”