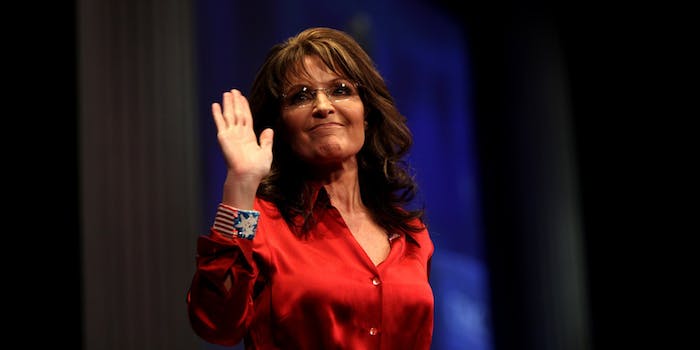 Fox and Palin seemed like a match made in heaven. But maybe not so much.

Sarah Palin and Fox News seemed like a match made in heaven. After the Alaska governor helped tank 2008 GOP presidential nominee Sen. John McCain’s (R-Ariz.) shot at the White House, Palin stepped down from office because actually governing wasn’t as much fun as simply being professionally famous and became a regular commentator on the conservative cable-news network.

Palin going to Fox News made perfect sense. She could effortlessly spout folksy talking points in a way that made Fox’s octogenarian audience momentarily wake up from their naps, gently nod in agreement, and then doze right back to sleep. She was also absolutely loathed by the liberals—yes, I’m talking about you, the godless, America-hating hippie who hate-clicked onto this article from Facebook—because she refused to play in any of their political games.

(Virtually all political games played by liberals are variations on the Listener Limerick Challenge from NPR’s Wait Wait…Don’t Tell Me).

Sadly, all good things must come to an end. On Wednesday morning, Politico reported that Fox News has elected not to renew the contract the network has had with Palin for the better part of a decade.

It is truly the end of an era. An era that, as the following clips show, Fox News probably wants to forget. Fox News may be U.S. television’s primary bastion of conservatism; but, over the years, Fox’s cadre of alabaster talking heads haven’t always been kind to the woman who was, for a brief moment, one heartbeat and a considerable number of electoral votes away from the presidency. In fact, a lot of the time, they were actually pretty mean.

You’d know about Fox News’ conflicted relationship with Palin if you ever watched the network. But we’re guessing you’re probably not in Fox’s target demographic and prefer to spend your time getting medical marijuana prescriptions via Skype and watching viral videos about adorable gay couples trying out new sex toys.

Anyway, let’s go to the tape:

Fox News might not miss Palin, but the rest of us sure will. OK, maybe “miss” is a bit strong. You know what we mean.