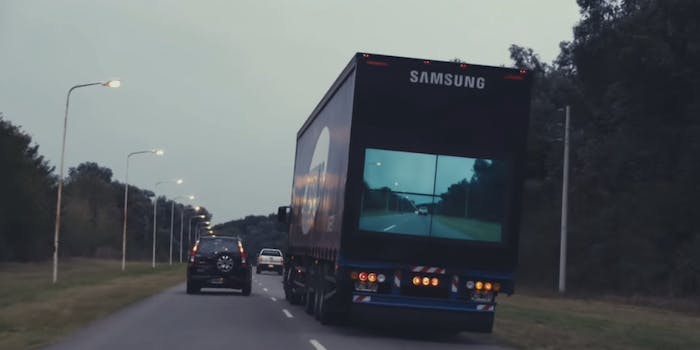 The tech could potentially save lives.

Passing semi trucks can be dangerous. It’s often impossible to see around them, and attempting to move a little faster on the highway can cost people their lives.

Samsung hopes it can change that, and is testing a fleet of semi trucks that record what’s on the road in front of them and display it to vehicles on the road behind them. The company tested the semi trucks in Argentina, where trying to pass large vehicles on small, one-lane roads account for a high percentage of automobile deaths per year.

The so-called Safety Truck is equipped with a camera in the front that provides a full view of the road on four screens on the back of the truck.

Creating “transparent” semi trucks is not a new idea—back in 2009, a Russian design studio came up with a similar way of making the roads a bit safer, though it never quite took off.

It’s unclear what Samsung’s plans are for its Safety Truck, but passing semis might not be a problem for much longer, especially if the Department of Transportation’s plan to equip all cars and trucks with vehicle-to-vehicle communication takes off in coming years. We’d be able to know what cars are around us, and automatically know the best routes to travel.