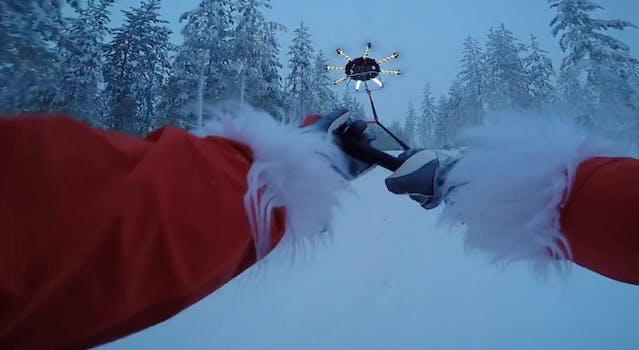 Super-powered drone takes snowboarder for the ride of his life

We don't know what's more impressive, the drone or the snowboarding.

Drone technology has been getting smaller and cheaper over the past few years, which has been good news for those of us wanting to purchase a flying machine for our own entertainment pleasure. At the same time, however, drones have apparently also been getting bigger, stronger, and more robust—and can even lift humans into the air.

In the Samsung-sponsored video below, YouTuber and CNN staffer Casey Neistat shows us some dare devilish (and downright clever) snowboarding feats with a drone.

The drone in the video is a custom-made, 16-rotor machine. It doesn’t just lift him, it can guide him (drag him) between snowy trees while he hangs on, waterskiing style. In other shots, you can see the drone carrying Neistat roughly 25 feet into the air.

We have to say, getting dragged up the ski slopes via drone looks way better than wasting an hour in the line for the lift. Judging by the reactions of locals and passersby, drone-based snow transport is not yet a mainstream way of getting around town though, that’s for sure.