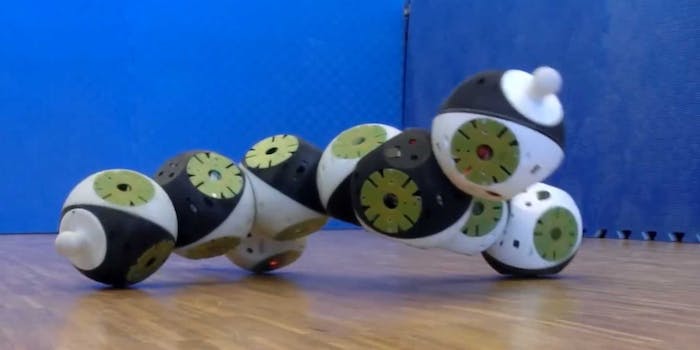 You can stop collecting those little Ikea wrenches now.

Life-size legos are coming: A team from Switzerland have designed moving, self-assembling furniture, calling it “adaptive furniture.” The blocks, called “Roombots” can come together and break apart to make up totally random designs as well as interact with other pieces of furniture. The team hopes the technology will have various uses, but it’s designed specifically for helping disabled or elderly people.

Each Roombot is 9-inches long and contains three small motors, which allow it to move three different dimensions, plus a wireless connector so they can communicate with each other.

Retractable claws, or “grippers,” can connect to them to other Roombots or a piece of furniture.  In order to attach the blocks to floors, walls or traditional furniture, the researchers developed a special surface that can be put on these objects, with holes for the Roombots’ claws.

No price has been put on the blocks yet. However Auke Ijspeert, who leads the Swiss team at the École Polytechnique Fédérale de Lausanne, hopes that any kind of furniture can be designed out of only the Roombots by themselves.

Watching them alone is a treat: In the video, the roombots assemble beneath a table-leg and roll to the move the table around. The researchers hope they can be used to help the less mobile, for instance an elderly person could summon the table, rather than having to walk over to it.

While they hope this technology will be useful for people living in assisted-living environments, they stress it has all sorts of applications. One scenario they envisage is an office or the home, in which the blocks follow employees around.

Ijspeert even suggests there could be potential for artists and designers to take advantage of the customizable form of the furniture, for example: An engineer from the Swiss team, Massimo Vespignani, said “Many people might think it’s kind of a crazy idea.” If this sounds like a nefarious technology from the future, “Don’t worry” says Vespignani, “I don’t envision a scenario where the robots are completely autonomous.”