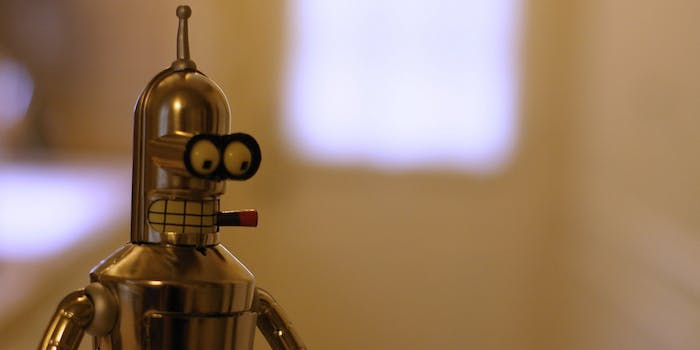 Robots are coming, and they want your job

Can technology make you obsolete?

Your smartphone is smarter than ever before, self-driving cars are on the horizon, and robot butlers are already making room visits. Do you know what that means? It’s just a matter of time before all those high-tech inventions start gunning for your job, 11 years to be specific.

The analysts at tech firm Gartner sees a near future where smart machines, software, and robots will overtake both physical tasks that machines already perform well, as well as intellectual jobs that they can accomplish faster than their human counterparts. Gartner predicts one in three jobs will be replaced by software or robots by 2025.

He added, “Knowledge work will be automated.”

If you’ve been keeping an eye on the tech beat the past few years, you’ve already seen the signs beginning to appear. Will we need delivery drivers when cars can drive themselves, or will these human workers be uprooted in the same way so many auto workers have been replaced by unimaginably precise robots over the past half century?

In fact, the very same could be said for the job I’m doing right now, which is creating copy and crafting a story. Software from a Chicago-based company called Narrative Science has already shown that it’s more than capable of creating sports stories and financial reports that can fool many readers into thinking they were crafted by the human hand.

Of course, there are also some much more dangerous jobs that humans should be ready and willing to hand over to lifeless bots, such as operations in warzones, recon missions flown by pilot-less crafts, and so on. Airborne smart machines are already a huge part of modern warfare, but ground troops can also benefit from—and potentially be replaced by—remote-controlled robots like the MAARS (Modular Advanced Armed Robotic System), which can target enemies as far away as 800 meters, and keep its operator safe.

So yes, technology is getting to the point where it could potentially replace you (and me!) in the workforce, but there’s another side to this coin. With more advanced technology comes more advanced problems, and at the moment, humans are still required when it comes to fixing robots and smart machines, not to mention inventing new ways for them to function.

So while certain occupations might end up in the cold, lifeless hands of a robot, those robots will still be in the hands of a human… at least for now.