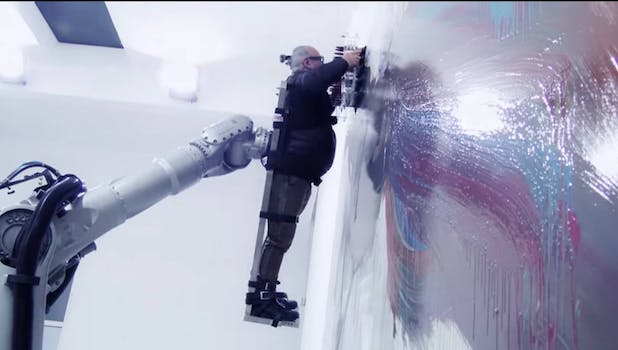 Watch a human become a paintbrush for a massive robotic arm

Dragan Ilic is a conceptual artist who explores how machines interact with art.

A robot creating a work of art isn’t necessarily groundbreaking stuff these days. But when a robot is painting on a canvas and using a human being as its brush, things get a little more interesting.

For years, visual artist Dragan Ilic has been obsessed with the idea of using robots and devices to push his designs. Utilizing modules and machines to hold his pencils, pens, and brushes Ilic has explored ways these mechanisms can help artists process their ideas faster. By using tools more traditionally intended for industrial drafting Ilic tries to find the most efficient way to create art. As his bio says, “The metamorphosis of the artistic work is positioned at a point where human and machine activity intersects, resulting in an interaction that is essentially based on the need to transcend the limitations of the human body.”

His new project looks to examine this process from another angle, one that literally elevates his body above the ground via the arm of a robot. Rather than using machines to help focus his artistic tools, Ilic’s latest project sees him becoming the robot’s paintbrush. As the large industrial factory robot’s articulated joints move about with Ilic attached, the artist is left only to create what the robot allows him to create. According to those involved it represents “both the repetitiveness involved in technological production, as well as representing a new stage of ritual or transgressive experiences of the author himself.”

There are risks involved with strapping yourself to a machine to paint. Machines break all the time, and a glitch could easily cause Ilic’s death. But the hypnotic beauty of watching a man become a brush for the cold efficiency of a robot is undeniable. Of course, if you hate art it’s still cool to watch a guy spin on a robot art while smearing paint around. Whether you’re just waiting for Gundum to be real or you spend your weekends in museums, give Dragan Ilic a moment of your time. He strapped himself to a robot for his art. The least you could do is watch.