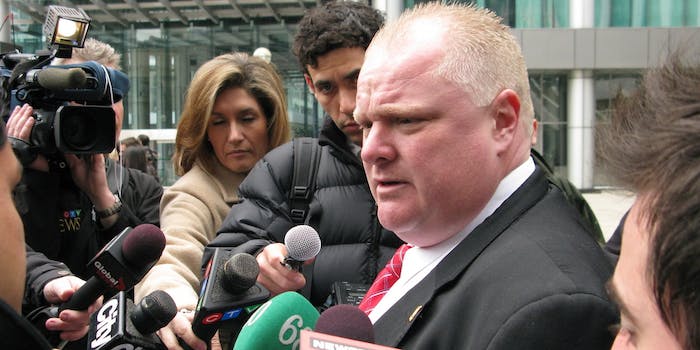 He was battling cancer.

Rob Ford, the former mayor of Toronto, has died after a battle with cancer, his family announced Tuesday morning. He was 46 years old.

Ford served as mayor of Toronto from 2010 to 2014. He was a member of the city council prior to his tenure in the mayor’s office.

“A dedicated man of the people, Councillor Ford spent his life serving the citizens of Toronto,” Ford’s family said in a statement.

Ford first rose to international prominence in 2013, after video surfaced online of what appeared to be the mayor engaging in abuse of crack cocaine. Word of the video quickly turned Ford into a larger-than-life character, drawing greater scrutiny to his day-to-day life.

While Ford’s crack cocaine smoking drew criticism, he remained popular among his supporters.

In September 2014, news surfaced that Ford was suffering from liposarcoma, a rare form of cancer that attacks fat cells. On Nov. 30, 2014, Ford’s term as Toronto mayor ended.