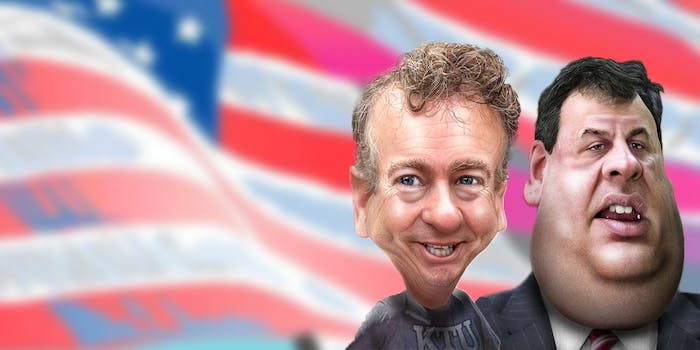 Rand Paul and Chris Christie, both rising stars of the Republican party, have very different views of the NSA's surveillance programs.

The next U.S. presidential election is years away, but Republican hopefuls are already defining themselves with strong positions on the National Security Agency‘s spy programs.

New Jersey governor Chris Christie said in a panel discussion Thursday that “this strain of libertarianism” running through his party—a nod to some Republicans’ criticism of the NSA‘s intelligence-gathering operations—is “a very dangerous thought.”

On Tuesday, the House narrowly defeated a sudden amendment that would defund the NSA’s practice of logging nearly every phone call that takes place on U.S. soil.

Senator Rand Paul (R-Ky.), who, alongside Christie, is one of the GOP’s rising stars, was a vocal supporter of that amendment. In accordance with his frequent touting of the Fourth Amendment’s right to privacy, he tweeted “Cong. defends spying on Americans but the Constitution does not,” and “The fight isnt over.”

Friday morning, Paul made his spat with Christie over privacy personal:

It’s impossible to imagine this debate would even be happening were it not for Edward Snowden, the former NSA contractor who fled Hawaii with proof of the agency’s metadata collection program. After leaking court documents that show Verizon regularly turns over all its customers’ call data, President Obama admitted and defended the program, and the Director of National Intelligence announced July 19 that it had been renewed for another three months.

Paul and Christie’s differences illustrate how decidedly nonpartisan the privacy debate is. Though Tuesday’s amendment bill was introduced by a Republican, Justin Amash (R-Mich.), the vote was almost perfectly split among party lines. And as Christie said Thursday, Obama and former president George W. Bush share very similar attitudes toward surveillance, saying “President Obama has done nothing to change the policies of the Bush administration in the war on terrorism.”

“And you know why? Cause they work,” he added.

Illustrations by donkeyhotey/flickr and phummers/flickr, remix by Fernando Alfonso III