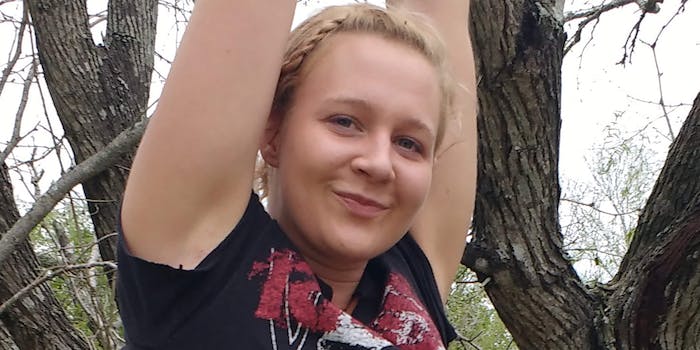 Reality Winner is asking for clemency—will she get it?

Winner believes it is time she is set free.

Russian interference in U.S. elections is no longer a novel concept. It’s not a conspiracy theory and it isn’t something that is any kind of hypothetical. It is an actual reality.

Which is why it’s ironic that a 28-year-old Air Force veteran whose name just happens to be Reality is in prison for telling a news outlet about something that is now well understood.

What was revealed by the Trump administration’s first whistleblower, Reality Winner, is that there was a coordinated effort shortly before the 2016 election to hack a voting software company. The information gathered from this was then used to conduct spear-phishing attacks against over 100 election officials, according to the classified document.

The Intercept published a redacted version of a classified document that was given to them by Winner, who is described by family, friends, and supporters as a thoughtful, caring person who never thinks of herself.

However, after Winner was arrested by the FBI and charged with leaking classified information as an employee with the military contractor Pluribus, the prosecution went to great lengths to try and prove that Winner was a dangerous individual because of what she joked about in private with her family. In addition, they went after her for owning books on Arabic, the Middle East, and Islam.

Prosecutors said if she were given bail she would be a target of recruitment by foreign adversaries. They also pointed to something she wrote in her diary about burning down the White House and moving to Kurdistan

Winner is now serving a five-year and three-month sentence in Fort Worth, Texas. She accepted a plea deal with the government in lieu of going to trial and facing a stiffer sentence.

A petition for clemency, which asks for her release, is set to be filed formally with the Department of Justice on Feb. 17, which her lawyer, Alison Grinter, said will include about 5,000 letters of support.

The Daily Dot spoke with family members, friends, and people in Winner’s support network who paint an entirely different picture of Winner than what lawyers for the government portrayed.

They say that the prosecutors for the government misconstrued her words in order to paint her in the worst possible light and that Winner was punished disproportionately in order to be made an example of.

Brittany Winner, Winner’s sister, holds a Ph.D. in pharmacology and describes her relationship with her sister as close. She speaks frequently with Winner through video chat from prison. She said before Reality was imprisoned, they used to share sarcastic jokes and funny cat photos over Facebook Messenger.

“We were constantly in contact and a lot of the time it is just about dumb stuff and we were very sarcastic,” said Brittany. “We kind of have our own little sister language. [Reality] kind of pushes the envelope when it comes to joking. Part of the joke is not admitting it’s a joke, right?”

The prosecution for the government took a more literal approach to Reality’s humor.

“Look I only hate America 3 times a day,” Reality wrote to Brittany once before her arrest. Winner said later that her hatred was “mostly just about Americans’ obsession with air conditioning.”

Winner wrote in her diary that she wanted to “burn down the whitehouse,” which the prosecution also decided to take literally when arguing to deny bail.

“When I was called to testify in one of her bail hearings years ago when this mess started the prosecutor actually used Facebook Messenger exchanges between my sister and me to prove that Reality doesn’t belong in society,” said Brittany. “It’ll never be the same because at least for now my conversations are heavily monitored. It’s just sad that the government would use that against us, against her, and deny her bail because of jokes that we made.”

Brittany was disturbed by what was shared in the courtroom.

“I also felt like it was a huge violation of my privacy because we had not just talked about that kind of stuff. We talked about private stuff and to think that there were FBI agents that were combing through all of her messages all her pictures, you know, everything that she had on her phone,” said Brittany Winner. “It’s just it’s just insane and it makes me really just kind of wonder what country we’re in.”

Billie Winner-Davis, Reality’s mother, works at a detention center in Texas, not far from where her daughter is in prison.

“It gave me a front-row seat into my daughter’s life, what it’s been like for her being incarcerated and what jail life is like for her,” said Winner-Davis.

Winner, while incarcerated, teaches a spin class and a nutrition class at Carswell prison.

Winner-Davis said that the holidays and her birthday have been particularly hard on Reality.

“She said ‘how crazy is [it] that a prison would want to remind us of the holiday season and we’re stuck here in this place’,” said Winner-Davis. She was worried that Reality was losing hope.

Winner-Davis says that her believe in government has been shaken since Reality went to prison.

“It seems like the truth is what they’re most afraid of. They will do whatever they can to stop the truth from coming out,” said Winner-Davis. “I don’t know how we ever got here. We got here because people were not paying attention and I was one of them. I was not paying attention to anything that was happening in our politics, our government, and how it became so big and so corrupt. But I’m seeing it now and living it”

What the Act does do is provide leverage for the government to punish those who leak government secrets.

Whistleblowers are dealt with harshly and not proportionately. Other examples include Chelsea Manning, who gave information to WikiLeaks about the Iraq and Afghanistan wars. Her sentence was commuted, but she is again now in jail for refusing to testify against them.

“it’s weaponized against American citizens at this point and that’s not what it was built for originally when it was first written,” said Liz Minor, project manager of Stand with Reality. Minor, who works as a field representative for insurance companies, traveled from upstate New York to Georgia in order to be at one of Reality’s hearings.

Although Reality Winner is filing for clemency, Minor stressed that it was important to make noise about Reality.

“Nobody on [Capitol] Hill knows who she is,” said Minor. “We’re failing her as a country and she did such a patriotic act. It doesn’t matter whether Trump is going to be the one to pardon her or not. That’s not an excuse. We need to keep raising hell.”

Wendy Meer Collins, who became a friend of Winner after her imprisonment, has been a constant voice of support for Reality and tweets nearly every day about her.

She was worried that Winner was left hanging because of a lack of news coverage.

“The wider mainstream media didn’t really report on this other than the prosecution’s narrative,” said Collins.

Because of the plea agreement, Winner and her family are not allowed to profit in any way off her revelations, so the government took down a GoFundMe page set up to support the Winner family and confiscated all the donations. It then didn’t provide an avenue for the money to be refunded.

The plea agreement does not allow Winner or anyone in her family or future family members to profit off the revelations.

This includes book deals and movies.

However, the pendulum may be swinging in Winner’s favor. A movie directed by Susana Foge, who previously directed The Spy Who Dumped Me, is in the works, and Winner’s case has gained some renewed attention recently due to a play called ‘Is this a room?’ that garnered critical acclaim.

Winner’s family and supporters are grateful for any noise about her. But Brittany Winner stressed that Winner was a normal person put in extraordinary circumstances.

“Enough is enough. She needs to be out. She doesn’t deserve to spend two more years of her life in prison for exposing the truth. She’s been punished enough.”