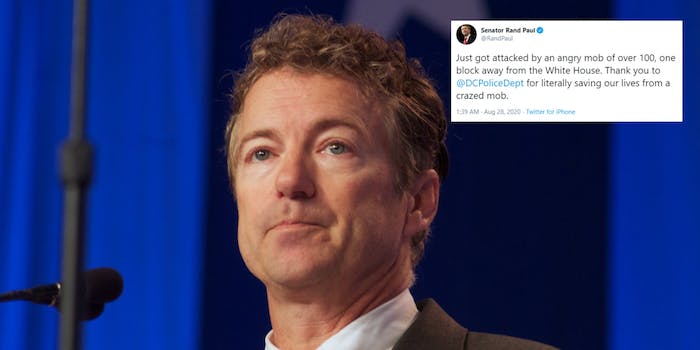 'You can totally die from people shouting at you.'

Last night, President Donald Trump officially accepted the 2020 nomination for president at the conclusion of the Republican National Convention.

After Trump’s speech on the White House lawn, protesters outside confronted attendees, including Sen. Rand Paul (R-Ky.). A minor scuffle between an officer and a protester ensued. Paul is now being ridiculed for claiming that his life was in danger.

As the senator and his wife made their way to their hotel, people followed them, shouting “Say her name,” “No justice, no peace,” and “Her name is Breonna Taylor.” Taylor, a Black woman, was shot to death in her bed by Louisville, Kentucky police serving a no-knock warrant earlier this year.

Afterward, Paul introduced the Justice for Breonna Taylor Act, which would ban no-knock raids. He has also, though, blocked federal anti-lynching leegislation.

A video posted by Brendan Gutenschwager shows last night’s brief shoving match between a protester and an officer escorting Paul and his wife to their hotel.

The officer was using a bicycle as a shield to control the crowd. When he roughly pushed a man with it, the man pushed back. The officer stumbled backwards into Paul. Neither fell.

Paul now claims that he could’ve been killed.

“Just got attacked by an angry mob of over 100, one block away from the White House. Thank you to @DCPoliceDept for literally saving our lives from a crazed mob,” Paul tweeted in the early morning hours.

People variously viewed the incident as Trump’s fault or Democrats’ fault, depending on their political leanings.

Most thought that the senator was being a bit dramatic.

“Cool story, bro. No one touched you,” Kevin Shanks tweeted.

Those sympathetic to Paul had another take.

Several suggested killing or imprisoning people who protest for racial justice or kicking them out of the country.

“Maybe this is a lesson to you. Stop supporting First Step Act or other such nonsense. MANDATORY MINIMUMS. Lock these terrorists up!” right-wing disinformation artist Mike Cernovich tweeted.

As of this writing, Paul was discussing the incident on Fox News.