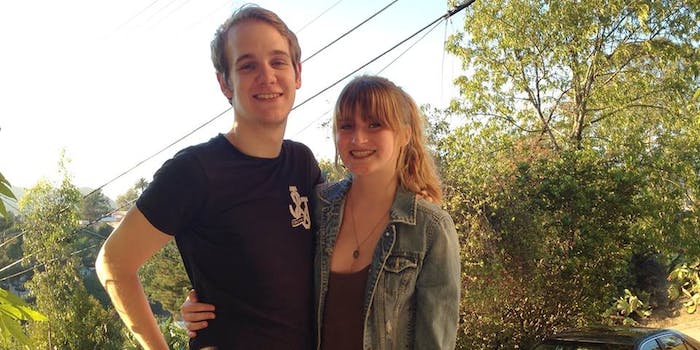 Is QuizUp the new Tinder?

This couple met on QuizUp, the mobile trivia game. They're not the only ones to find love on a gaming app.

One day in November 2013, Erin Tarnoff, an 18-year-old medical anthropology student from Los Angeles, logged onto the app QuizUp to play Lord of the Rings trivia. The trivia game matches you with opponents from all over the world, and that day Erin was matched up with Nick Fieldsend, a 24-year-old volunteer policeman from Hull, United Kingdom, who was having a slow night at the bar where he works part-time. When the game was over, he asked her for a rematch, and they played a few times before Nick started messaging her.

At first, Erin was a little unnerved by Nick’s message: “I’d never spoken to anyone on the Internet before,” she said. “I was totally weirded out by the concept of it.” Still, they kept chatting, bonding over their shared love of Lord of the Rings and the fact that they were both the youngest siblings in their respective families.

Shortly after that, Erin asked Nick if he wanted to be Facebook friends, because the QuizUp chat was sapping their phone batteries. (She admits she also wanted to see more of his photos, as QuizUp only lets you have one default picture.) Shortly afterward, they started Skyping daily, and by March, Erin had booked a ticket to Heathrow airport to stay with Nick and his family for two weeks.

Prior to meeting on QuizUp, neither Erin nor Nick had messaged anyone on the app; they certainly hadn’t expected to meet anyone they’d become romantically interested in through the game. But on that day, which was either Nov. 22 or 23 (depending on which one of them you ask), they fell in love on a quiz app. “We clicked on the same category, on the same game, at the same time,” Nick said. “The odds of that happening are just unbelievable.”

While Nick and Erin’s story is unique, it’s not unrepresentative, as they’re far from the only couple to have found love (or at the very least, sex) on gaming apps with social features. Since launching last year, QuizUp has received a number of messages from players like Nick and Erin who were matched up on the platform, says QuizUp founder Thor Fridricksson. While the app was initially intended solely as a global interactive trivia game, “what surprised us the most was the activity we saw on the social side,” Fridricksson told me from his office in Reyjakavik via Skype. “People were adding new friends and getting matched up and chatting afterwards.”

And the more niche the interest, the better, Fridricksson says: Users who were matched up for K-pop trivia games, for instance, were likely to start correspondences with each other. QuizUp flirting is apparently so rampant that there’s even a guide to the practice on the Date Report.

Since realizing that QuizUp was being used as a social networking app, Fridricksson says it will roll out additional social features, which it plans to launch over the next few months.

And it’s not the only gaming app to take advantage of its social component. Couples have been meeting on MMORPGs like Final Fantasy for years, and there have also been instances of couples meeting via Facebook’s Farmville.

Earlier this month, Zynga’s Words With Friends launched an in-app Tinder feature (albeit a somewhat underwhelming one), which lets you choose which users you’d like to play with based on location and gender. Although Zynga vice president Jonathan Knight said the company added the feature to give users “different ways to make a connection,” it was clearly intended to capitalize on the fact that people have been using Words With Friends as a matchmaking platform for years.

The popularity of gaming apps as de facto dating networks begs the obvious question: Why aren’t these users optin for traditional dating apps or websites like Tinder or OkCupid instead? Fridricksson posits one possible explanation: that people are frustrated with the creepiness and “transparency” of traditional dating apps, and are moving to less traditional forms of hooking up instead.

“When you think of dating apps like Tinder, their main focus is also to bring people together that don’t know each other, but the purpose is so transparent,” he says. “When a guy is messaging a girl through a dating site or app, the purpose of the outreach is really him saying, ‘Hey, do you want to have sex with me?’”

While Tinder and social networking platforms like Facebook allow users to connect over shared interests and “likes,” it’s not in as structured a way as a gaming app like QuizUp: “A place where people can actively discover others who share the same niche interests as them doesn’t exist on the Internet.” Plus, there’s the added element of a healthy dose of competition inherent in gameplay, which any sex therapist will tell you is an aphrodisiac in itself.

Does that mean you should delete Tinder and download QuizUp? Not quite, says Nick. “I wouldn’t recommend it for dating if I’m honest,” he says. “It’s more just a fun game to play to take up time, especially when everyone you play with is so far away.”

But it seems to have worked out for him and Erin: She’s planning on transferring to a British university to study abroad next year so she can be with him. Until then, they’re Skyping and chatting every night, but oddly enough, he says, they no longer play QuizUp together. “We kinda grew out of it and evolved a little bit,” he says. “After a while, it felt weird to play QuizUp if you weren’t playing QuizUp with Erin.”