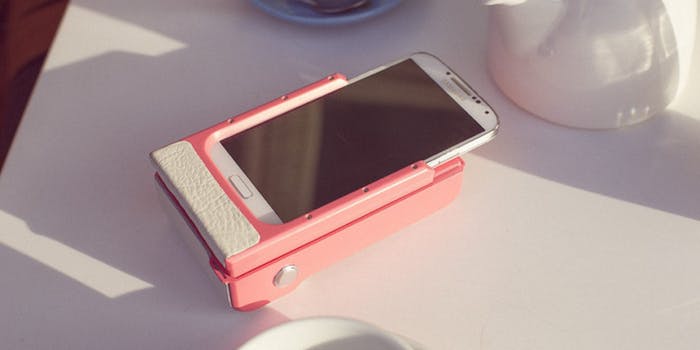 Will it success where others have failed?

If there’s anything we’ve learned about mobile photography, it’s that our digital moves forward are marked by plenty of nostalgia. Such is the case of Prynt, a smartphone case that turns the device into a modern day Polaroid.

The bulky case makes up for its inconvenient size by giving you on-demand access to its built-in photo printer, meaning your every Instagram can immediately be brought to life.

As of Tuesday, Prynt is officially available for pre-order on Kickstarter, and as expected, it’s doing quite well. A rep tells me that Prynt hit its $50,000 goal in only 33 minutes, and that the product is “definitely going into production and backers will receive their units from this summer.”

Of course, just because a team can helm a successful Kickstarter and debut to massive acclaim doesn’t mean everything will go smoothly when it comes to manufacturing. But Prynt says it’s prepared.

Prior to launching, the team went through a specialized hardware accelerator called Haxlr8r, and it’s contracted a South Korean manufacturer (which has worked with companies like LG and Samsung) that’s ready to start filling orders. And of course, Zink Imaging has been working with Prynt for four months and will be providing the photo paper.