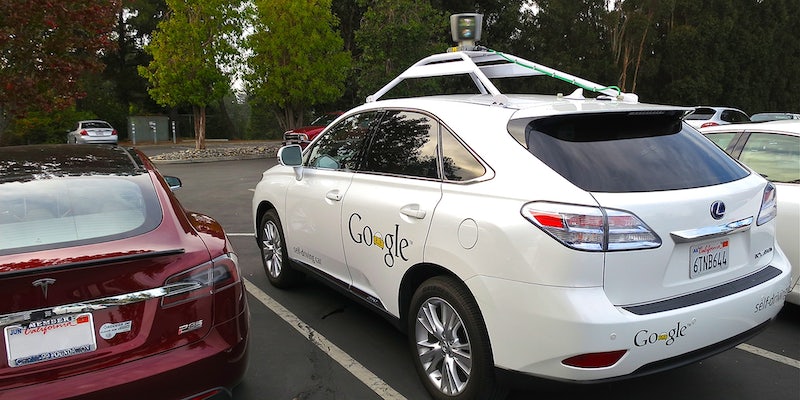 Poll shows Americans are scared of autonomous cars, and for no good reason

Autonomous cars are coming, whether we like it or not.

The self-driving car has its skeptics. New data shows that many Americans aren’t yet ready to welcome autonomous vehicles to the road and their lives.

In results that likely surprised no one, young people are more open to the idea that driverless cars are safe, and older voters are more hesitant toward the tech. The group of voters aged 18-29 was the only one with a majority who agreed driverless cars are likely safe. Additionally, women are more likely than men to doubt the safety of autonomous vehicles.

The polling shows that despite the hype in the tech community surrounding a future where cars drive themselves, average consumers aren’t ready to adopt them quite yet. Fully autonomous cars aren’t available for consumers, but Google and other vehicle manufacturers are testing them on roads across the U.S. already. Delphi tested a modified Audi SQ5 on a cross-country road trip last year, and Tesla recently debuted Summon, a way for drivers to have vehicles automatically pick them up and assist with parking in tight spots.

The federal government also wants to invest in the future of autonomous vehicles. At last month’s North American International Auto Show in Detroit the Obama administration proposed a 10-year, $4 billion investment to “accelerate the development and adoption of safe vehicle automation through real-world pilot projects.”

Despite tech and policy driving the future of autonomous transportation, consumers’ skepticism shows there’s still hesitation to get behind the wheel of a ton of metal that controls itself. But safety concerns, while valid reasons to doubt self-driving cars, might be allayed with data.

In a November 2015 study from the University of Michigan Transportation Research Institute, researchers discovered that while statistically driverless cars are more accident prone, all 11 accidents such vehicles got into were entirely the fault of other human drivers. And in eight cases, the cars were stopped or going less than five miles per hour. Additionally, the comparative data was based on the number of human driver car accidents actually reported; 10 million car accidents are estimated to go unreported in the U.S. each year.

Most of the people in the U.S. don’t have an autonomous vehicle, or have ever been a passenger in one. Considering how far out we are from an actual self-driving car that people can purchase and ride home in, the skepticism toward the automated tech is totally understandable. But early data shows it might be unfounded—cars driven by computers might actually be safer than those driven by humans.

Photo via Steve Jurvetson/Flickr (CC BY 2.0)