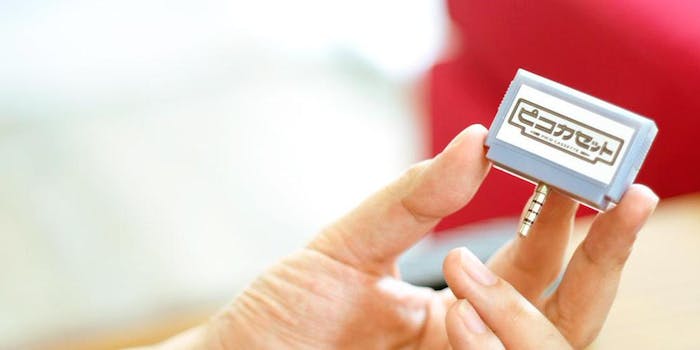 Turning smartphones into classic game emulators is everyone’s favorite trick, but Japanese startup Beatrobo wants to bring back some of the old school charm that is missing from the process.

The Pico Cassette is an unabashed attempt to provoke that itch for nostalgia that every person who owned a cartridge-based game console cannot help but scratch. The idea is to restore the sense of ownership that came with plugging in the cartridge (then ejecting it, blowing into it, and trying it again when it didn’t work the first time).

Beatrobo has designed the miniature cassettes to resemble Nintendo Famicom games while utilizing the company’s PlugAir technology to bring the titles to the smartphone’s screen.

PlugAir has been used previously to sell sell physical music and video content. The technology converts sound waves into electric power and data, which is used to authenticate the device and unlock content. In the case of the Pico Cassette, it acts as an authentication key that allows you to play the game, which is stored on your actual device.

Game consoles and PCs have had the capability of digitally storing games on built-in hard drives to eliminate the need for the physical copy. Now imagine if you still had to maintain the physical disc and insert it into the console to actually access all of the data that is stored off-disc. That’s essentially how Pico Cassette works.

Pico Cassette does a little more than just serve as a reminder of gaming’s golden years; it also gives the owner the ability to access saved games on a different device. Your saves are handled by the faux cartridges, which can communicate with Beatrobo’s servers and allow you to pick right back up from where you left off no matter what device you’re using.

Pico Cassettes are still a ways away from making their debut; the company plans to pair with content partners to get games on the system, then launch a crowdfunding campaign to bring them to market.

If you miss the days of 16-bit graphics, you have something to look forward now instead of just memories to look back on.

H/T The Verge | Photo via PicocaProject/Twitter