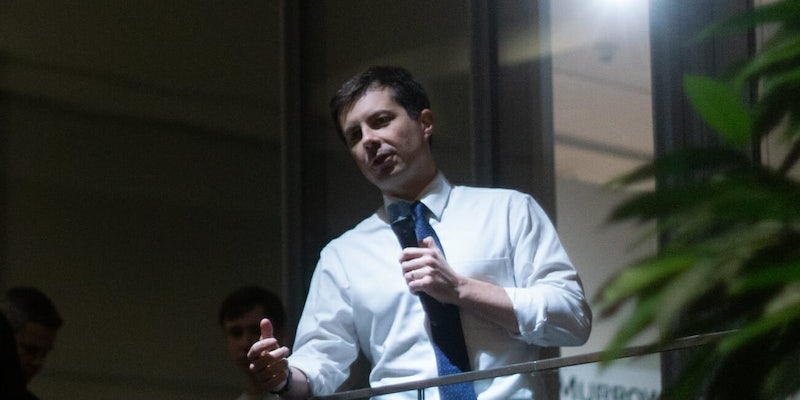 Skeptics are calling for conservatives to pause before using the latest accusations about Pete Buttigieg, shared by fringe conspiracy sites, as political ammunition.

Skepticism is being raised around an allegation which surfaced in a blog post published Sunday accusing Democratic presidential hopeful Pete Buttigieg of sexual assault and which quickly ricocheted around several fringe conservative media sites.

In the post published on Medium, a 21-year-old Michigan college student named Hunter Kelly claims that he did not know Buttigieg was a politician when he met the lawmaker in February and that in coming forward he hopes “to stop a very bad man from becoming President of the United States.”

Kelly, without going into further detail, says that Buttigieg sexually assaulted him. Describing how he has struggled with the decision to come forward, the young man then promises to share his “full story with the nation” in the weeks ahead.

One day later, on Monday, news of the accusation was circulating on hyperpartisan, right-wing media and conspiracy sites like InfoWars, the Gateway Pundit, and BigLeaguePolitics.

Others urged conservatives not to politically revel in the allegations.

One Federalist reporter urged Grand Rapids Police Department and the FBI to look into it.

This is a very serious accusation @GrandRapidsPD, made against presidential candidate @PeteButtigieg. This should have been reported to you if truthful.@fbi This might need your attention. This puts Mayor Pete in danger.

Indeed, getting an understanding of just who is behind the accusations is rather difficult and downright confusing.

The Twitter profile owned by Kelly and linked to the Medium account which published the accusation, @realHunterKelly, was created in April and has only one tweet and two retweets. Most of Kelly’s seven favorited tweets sport the hashtag #OrganizeWithBernie—pushed by grassroots supporters of left-wing presidential candidate Bernie Sanders’ campaign. He also follows six Sanders accounts as well as some Canadian media accounts.

In seeking to make contact, the Daily Dot also came across a Facebook user profile and an old Twitter account which appear to have been owned by the same man—under the name Hunter T Kelly.

A username shared on this Twitter account indicates that the user was born in 1997, making him 21-years-old, like @realHunterKelly. Both these social media profiles, however, include numerous pro-Trump messages and conservative talking points.

Happy #SuperTuesday everyone! Let's go, @realDonaldTrump! It's time to #MakeAmericaGreatAgain

#AlwaysTrump trump will win this election.

The face you make when you've committed years worth of felony offenses but it doesn't matter because you're a political elite.

We will not let Traverse City get steam rolled with illegals.

The Daily Dot reached out to Kelly via both Twitter accounts. He did not respond to an inquiry by press time. When reached by the Daily Dot, Buttigieg’s campaign pointed to comments he made today.

“I’m sure it’s not the first time somebody is going to make something up about me,” he said at a press gaggle. “It’s not going to throw us. Politics can be ugly sometimes but you have to face that when you’re in presidential politics.”

As several Twitter users noted on Monday, in this the era of the MeToo movement, all allegations of sexual assault these claims of a sexual assault are serious and must be treated so.

Nonetheless, given that the actual details of the alleged incident are yet to emerge and the speed with which the fringe right grabbed the story, caution and pause seem justifiable.

Update 7:59am CT, April 30: Almost immediately, and as suspected, the story was revealed to be the work of conservative operatives Jacob Wohl and Jack Burkman. Kelly said that he met with the two to discuss a political opportunity, but instead found his identity stolen and the smear published. You can read more here.