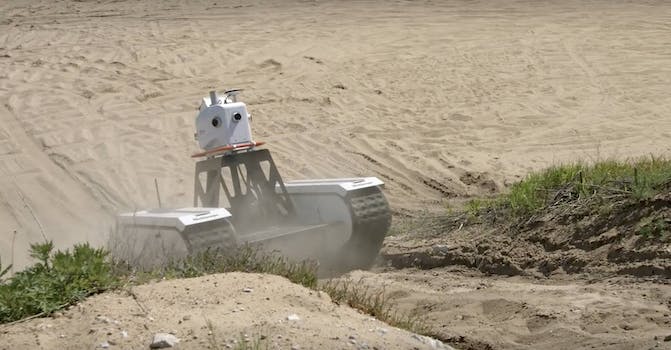 Photo via Milrem AS

The Pegasus: Multiscope can drive almost anywhere and be outfitted with a wide range of accessories.

When we talk about drones as a society, most of the focus goes to the ones that fly above us, but the future of drones could very well be on land. A new ground-based drone called the Pegasus: Multiscope, built in collaboration with defense contractor Milrem and mapping company Leica Geosystems, can go almost anywhere while creating a 3D picture of its surroundings.

The 3.2 foot tall drone can travel at 15-22 mph, and traverse many different kinds of rough terrain thanks to its rugged tank-like treads. Mud, rocks, sand; this little Johnny 5 lookalike can cross them all without worry. This makes it a great alternative to manned foot patrols in uncomfortable environments.

Pegasus can utilize a number of different tools, attachments, and even power sources. On average it can work for 10 hours on a single charge, but can be outfitted with a diesel motor for operations where charging isn’t an option.

Attachments include a robotic arm, fork lift, 3d sensors, and even simple bulldozer-like mover tools. While the 3d sensor makes the machines ideal for things like border security, the number of customization options allow Pegasus to be useful in industrial recovery and maintenance situations as well.

In the case of a nuclear disaster we could send in the drones instead of risking human lives. The vehicles can be programed to follow a set route, shadow a person, or swarm over an area via cloud communication with other drones. Sadly they won’t be available for civilian sale, but we can always dream of living out our own version of Short Circuit.