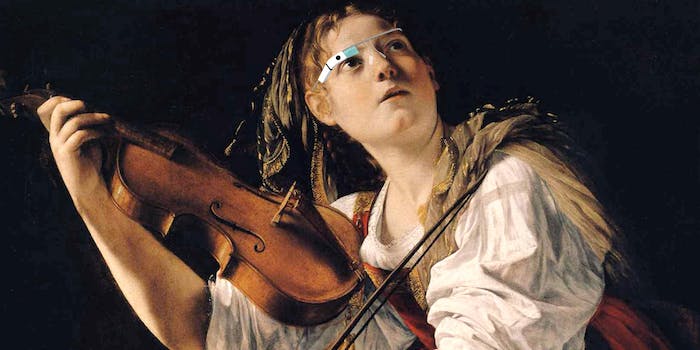 Orchestras of the future may wear Google Glass

The device could even bring about a new style of musical notation.

Professor Cynthia Johnston Turner, Cornell University’s director of wind ensembles, was invited earlier this year to pay $1,500 to become a beta tester for Google Glass, thanks to an enthusiastic tweet. “I’d use it in the music studio, rehearsal room, and classroom to record conducting students and give immediate feedback!” she said of the wearable computer device, which won’t be available to general consumers until 2014, according to the Chronicle of Higher Education.

Since then, Turner has used Google Glass to capture and project her point of view as an orchestra conductor, which can make for a uniquely immersive experience, as in this YouTube video of a performance of Greg Wanamaker’s multimedia piece “A Story within a Story.”

But that’s just the tip of the iceberg. Last week, Turner gave a talk at Cornell called “Go Go Gadget ‘Google Glass,’” and laid out some apps she’s developing. For one, she figured, we could do away with the archaic nuisances of sheet music and music stands, which, aside from cluttering the stage, have a tendency to clank, squeak, teeter back and forth, or otherwise malfunction, distracting both performers and observers. Why not scroll through your music on a head-mounted screen instead? (It’s worth wondering, though, whether a Google glitch mid-opera might present a greater disaster than a missing page of Beethoven’s Ninth.)

Beyond that, Turner envisions the possibility of altogether new musical notation for the digital age. This could be a tougher sell, given that we haven’t modified the whole notes-on-a-staff thing too much over the last 500 years. Still, we can’t fault her for wanting to give classical composition a 21st-century spin. It’s either that or an entire orchestra of these: