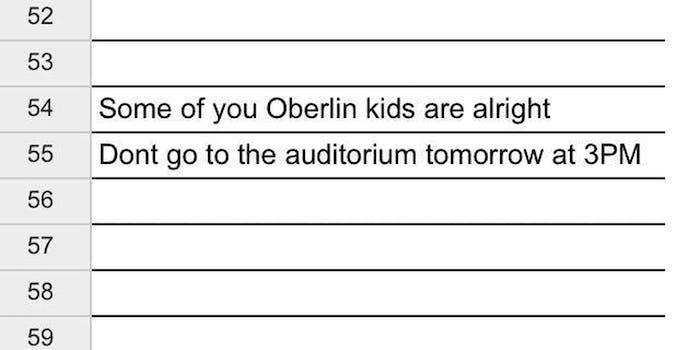 Anonymous editors threatened the students via a Google doc

One group of students just wanted to change their school for the better. Then the Internet showed up.

On the morning of Dec. 16, Sophie, a 21-year-old senior at Oberlin College and member of the school’s black student union, ABUSUA, delivered a petition with over 700 signatures to the president of Oberlin College, Marvin Krislov. The petition, circulated to the Ohio college in a Google doc the Monday prior, read as a list of demands, enumerating requirements for improving the visibility and community of black students.

Less than 12 hours later, a separate Google doc containing the signatures was defaced by a group of anonymous editors. They posted ASCII art of Adolf Hitler’s face, threatened lynchings, and alluded to an attack on the school’s auditorium. Students were already facing anonymous harassment over the petition from other students over YikYak, a location-based social app that allows users to post anonymous messages.

In response, Krislov penned an email to the campus.

Last night at approximately 10 p.m., an unknown party replaced the signatures on the public online version of the ABUSUA demands document with hate speech and threats. These acts are cowardly and deplorable and we will do everything in our power to identify and hold the perpetrator(s) accountable.

Upon receiving the initial report, my colleagues and I immediately began working with [campus] Safety & Security and reported the incident to the Oberlin Police Department to ensure the safety of our community. Our investigation has identified a thread posted to an online community that is notorious for acts of this nature. Members of this community, which is external to Oberlin, are likely responsible for the defacing of the online document. While in most cases these threats remain limited to internet trolling, regardless we are taking every precaution.

We increased the presence of Safety and Security across campus last night and there will be officers patrolling key areas throughout the duration of finals period. We have also been in regular communication with local law enforcement to evaluate information as it develops, and we continue to communicate and collaborate with them as they support us.

The Oberlin police department did not reply to the Daily Dot’s request for comment in time for this story. However, it seems likely that the site the president is referring to was 4chan. In a thread on /pol/, 4chan’s right-leaning politics imageboard, an anonymous user tipped off the community that ABUSUA had made this list of demands with an additional Google doc for signatures that anyone could edit.

Oberlin Collage’s [sic] black student union just submitted this list of demands. Most of them being totally unreasonable and illegal.

the list ends with this phrase:”These are demands and not suggestions. If these demands are not taken seriously, immediate action from the Africana community will follow.”

BUT they also released this petition to go along with the list of demands, anyone can edit or delete names off of the petition.
So let’s take action and delete the names

After taking screenshots of the damage done to the signatures page, the Google doc was deleted. However, the list of demands still exist as a PDF.

In an interview with the Daily Dot, Sophie said nothing ultimately came of the threats and no one was harmed. But she said it did inspire many non-black students to make silent protests in solidarity and bring food to black students who felt too afraid to leave their dormitories.

Full disclosure: My connections to Oberlin College run deep. Not only am I an alumna of the college myself (class of ‘11) but my father is a professor of economics there. He and several other members of my family, going back five generations, have also attended Oberlin for our undergraduate education. However, I have never personally given money to the college aside from my tuition.

The events come at a time when racial tensions in higher education institutions in the U.S. are at an all-time high. The racial unrest at the University of Missouri prompted ABUSUA to pen the petition, Sophie said.

The petition is one of many that have catalogued the organization’s ongoing efforts to affect school policies in a way that they feel better serves to strengthen the community of black students, as well as ties between the college and the town of Oberlin where it’s based. But this petition was different in that it demanded the changes, rather than suggest them.

The rationale was, “if we demand, now the school’s going to sit down and listen,” Sophie said.

The demands included making mandatory courses exploring black culture, history, and music to be taught alongside the already-mandatory courses doing the same for Western culture in the humanities departments. The students also demanded that more jazz music courses be made mandatory for students in the school’s classical music conservatory.

“If Oberlin is as progressive as it claims to be, I don’t think these [demands] are unrealistic with the legacy of this school.”

Other demands included providing free housing over school breaks for foreign students who, for safety or financial reasons, cannot return to their home countries.

Some demands included the firing of certain administrators at the school, as well as a dramatic increase in admission of black students from Africa and the Americas.

Currently, students self-identifying as black make up just 5.2 percent of the small school’s population of 2,912 students. That number is down from 5.5 percent in 2010, according to the school’s Institutional Research department. Roughly 80 to 90 percent of students identifying as African-American make it to graduation, though in a number of years between 2000 and 2014 that number has been as low as 75 percent.

Despite these numbers, several people local to the area took to YikYak to express their frustration with the petition.

“Oberlin went crazy on YikYak and they started tearing it apart, saying that this is just another case of black anger,” Sophie said. “No one wanted to sit down with the students and understand where they’re coming from.”

Sophie said she signed onto YikYak and identified herself, despite the forum’s anonymity. She said she hoped to open a dialogue with the other users expressing frustration at the petition. But the response, she said, was less a dialogue and more people “going ham” on her, saying she was full of herself to identify herself on the site.

“I was so disappointed because you just expect so much more from Oberlin College students,” she said.

Oberlin College brands itself on its liberal, progressive-minded students. It’s not uncommon for students to introduce themselves with their preferred gender pronouns. The school boasts itself as the first higher learning institution to admit fully integrated black students.

In recent years, however, Oberlin has come under bad press. Most recently, it’s been the object of scrutiny from several publications because students have protested the Asian and Africana food options at the school as being disrespectfully inaccurate and culturally appropriative. In 2013, the school shut down classes amid racial tensions over the alleged sighting of a person wearing Ku Klux Klan robes on campus.

The school closed for its winter break on Monday. According to Oberlin’s director of communications, Scott Wargo, the administration will take this time to review ABUSUA’s petition and come up with a response.

“The College is 18 months into a strategic planning process, and it has been clear from the start that inclusion and diversity will be a primary focus,” Wargo told the Daily Dot in an email. “However it won’t be complete until march.”

Sophie said she could see how some people outside the group may see the ABUSUA’s demands as ridiculous. But to her, at a $50,000-per-year liberal arts college, she doesn’t see it as outrageous to demand the college continue its legacy of progressiveness. Part of what the students are paying for, at Oberlin, is the experience of going there.

“Why is it [that] an institution that teaches us to be critical about these things is still failing so hard in achieving some of the things it’s making us critical to?” she asked. “If Oberlin is as progressive as it claims to be, I don’t think these [demands] are unrealistic with the legacy of this school.”

Editor’s note: Following initial publication, Sophie asked that we omit her full name to protect her from further harassment.