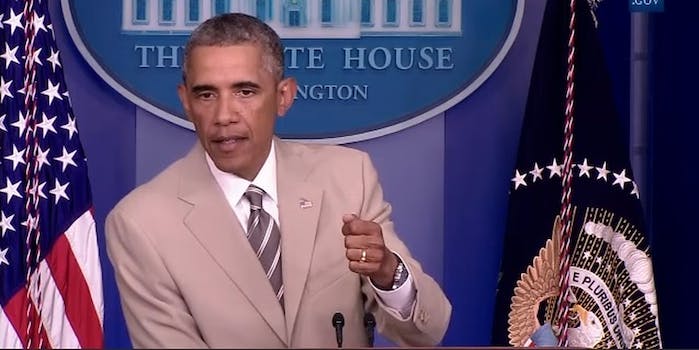 Obama talks war, but all anyone cares about is his tan suit

President Barack Obama took questions from the White House press corps Thursday afternoon on a range of life-and-death issues including Syria, Iraq, Russia’s aggressions against Ukraine, and the ISIS takeover in the Middle East. But the only thing Twitter wanted to talk about was the commander-in-chief’s tan suit.

Here are just some of the many, many comments on the suit, an unusual choice for a president who almost always addresses the nation in a more traditional dark-colored attire.

This suit is the boldest thing Obama’s done in months.

This suit is a devious distraction from #Benghazi.

Social media will comment more on the President’s tan sport coat than his words.

if you want people to ignore what you’re saying, change up your suit color

I see no problem with the suit. pic.twitter.com/ZFFt75FedU

WH press staffers to one another 30 minutes ago, “should we say something?”

Obama vows to defeat whoever made him wear this suit. pic.twitter.com/zoqj7OVFRe

Obama looks like he walked into Brooks Brothers looking for a suit and forgot to stop at the tailor on the way out.

I’m imagining an adorable West Wing-style anecdote where Michelle spills something on Obama’s jacket and he has to borrow an aide’s instead.

You know, tan really suits him.

“Russia’s actions in Ukraine are TAN-tamount to war.” — Obama, I wish.

So finally everyone is talking about what a male politician is wearing.

This is also probably the only time Obama’s critics have wished there was more black in the White House.

I’m sorry but you can’t declare war in a suit like that.

Of course you exist. RT @Obamastansuit: How do I look? #tansuit #potus

Two of which didn’t last

Message from senior White House official: ‘He loves that suit.’